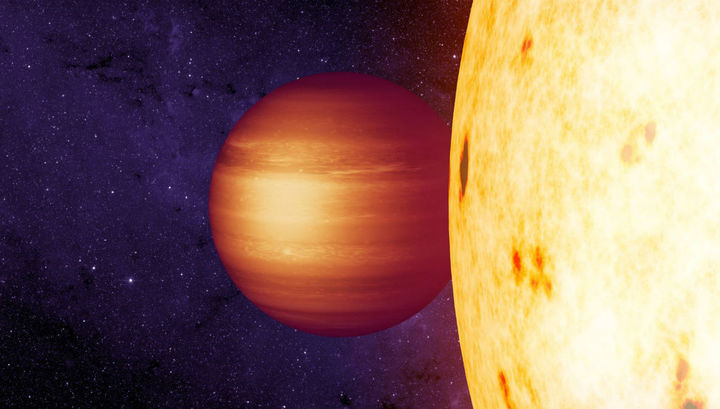 Hot jupiter, opened in December 2007, was hotter than anything at the point where it follows according to existing models. Such an intriguing result is set forth in a scientific article that a team of astronomers led by Lisa Dang from McGill University in Canada published in the journal Nature Astronomy.

Recall that hot Jupiters are called large gas planets, located very close to their star. Because of this, they heat up to huge temperatures. Moreover, the gravity of the star unfolds the planet with one side to the luminary, just as the Moon is always turned to the Earth by one side. The temperature difference between the “day” and “night” side reaches hundreds and even thousands of degrees.

Where will the hottest point of the surface be? It is natural to assume that “directly under the star”, where the heating takes place by direct rays. In fact, powerful winds often shift this point to the east.

But the world CoRoT-2b, located 930 light years from the Earth, presented a surprise to astronomers. Open ten years ago, he has been intriguing specialists all this time with two peculiarities: an unusual spectrum and the fact that he is heavily extinguished even by the standards of hot Jupiters. However, recent observations of the space infrared telescope Spitzer brought quite incredible information.

It turned out that the hottest point of the planet is shifted from the “sunflower spot” not to the east, but to the west. And at a very serious level: 23 ± 4 degrees.

“We previously studied nine other hot Jupiters – giant planets that rotate very close to their stars, in each case they had winds blowing to the east, as the theory predicted,” – quotes a press release from the co-author of the article Nicolas Cowan, .

There is no satisfactory explanation for this result. Scientists have several versions, but almost all of them break existing models.

First, it is possible that the planet is still not turned to the star by one side. Recall that this configuration occurs when the “day” of the planet are equal to its “year”, and this equality for fairly close planets is inevitably achieved because of tidal forces.

The unusual location of the hottest point can be explained if we assume that the “day” of the planet lasts longer than “year”. By the way, this would help explain the anomalously large radius of the planet.

However, in this case, scientists fall into the classic situation, when one of the vegetables is not sweeter than the other. Such a strange rotation can not be explained on the basis of existing models of the gravitational interaction of the planet and the star close to it.

It’s possible that the whole thing is in an unusual cloud pattern. By the way, and the strange spectrum of the planet in this case becomes clear. But this breaks the notion of atmospheric circulation on hot Jupiters.

Perhaps the only hypothesis that is more or less within the framework of existing theories suggests that the planet has a powerful magnetic field. The effect of this field on the wind pattern could explain the strange shift of the “hot spot” to the west. In this case, scientists have a rare opportunity to study the magnetic field of the exoplanet.

However, for the final conclusions, as usual, there is not enough data. Astronomers hope for the near-launch of the telescope “Jace Webb”, which, among other mysteries, is to resolve this one.