The theory of relativity is confirmed on intergalactic scales 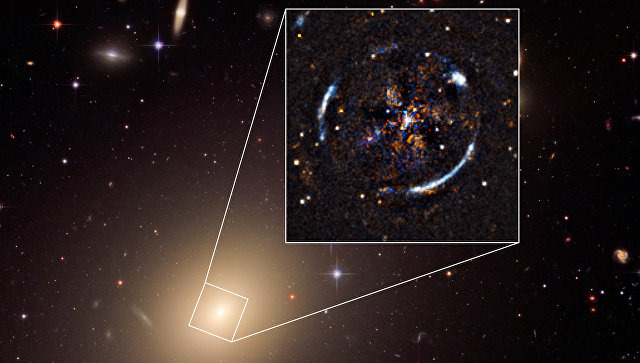 A gravitational lens created by a distant galaxy helped scientists to measure the curvature of space at intergalactic distances for the first time and to confirm the validity of the calculations of Einstein’s general theory of relativity. Their findings were published in the journal Science.

“We knew the mass of the farther galaxy whose light was passing through the lens, and we measured how much its light was distorted using the Hubble.” Then we compared these measurements in order to calculate the force of attraction. “It coincided with what predicts the theory of relativity, with a difference of plus or minus 8% .As long as this is the most accurate and “distant” test of GR, “- said Thomas Collett (Thomas Collett) from Portsmouth University (Great Britain).

Scientists check the truth of the general theory of relativity and its “competitors” with the help of three standard tests. “Correct” theories should accurately predict the degree of curvature of light when passing near the Sun, as well as explain the anomalous displacement of the orbit of Mercury and the existence of a gravitational redshift.

Passing the first two tests can be easily verified experimentally by observing these objects. Often, such checks do not convince “skeptics”. They require verification of Einstein’s calculations on interstellar and intergalactic scales, referring to alternative theories of gravity, which point to the “local” nature of such anomalies.

Collette and his colleagues embodied this dream of “Einstein’s subversive” in life, observing with the help of Hubble for the newly discovered galaxy ESO 325-G004, located in the constellation of Centauri, 465 million light-years from the Earth.

It is believed that any accumulation of matter of large mass, including dark matter, interacts with light and causes its rays to curl, just as ordinary optical lenses do. In some cases, the curvature of space helps astronomers see ultra-distant objects that would not be available for observation from the Earth without a gravitational “increase.”

If two quasars, galaxies or other objects are located one after another for observers on Earth, an interesting thing arises – the light of a farther object will split as it passes through the gravitational lens of the first. Because of this, we will see not two, but five bright points, four of which will be light “copies” of a more distant object. Such objects are often called astronomers rings or crosses Einstein.

As Collett points out, just beyond the ESO 325-G004 there is an even farther galaxy, which gave rise to an “Einstein cross” of ideal shape and very large dimensions. This allowed scientists to test the theory of relativity by measuring the curvature of space in the vicinity of this galaxy and how much its attraction warps the light of the second “star metropolis.”

For this, astrophysics measured two parameters of this lens – the mass of the ESO 325-G004 itself, observing the speeds of the stars inside it with the help of the ground-based VLT telescope, and how far “copies” of the farther galaxy were relative to the center of the “Einsteinian cross”.

Both of these properties of the galaxy are related to each other – they directly depend on the gravitational force produced by ESO 325-G004. Accordingly, if Einstein’s calculations are correct, then the force of attraction calculated by both these parameters will be the same, and significant discrepancies in it will indicate the erroneous nature of general relativity.

Once again it turned out that Einstein was right – the degree of curvature of space, calculated in both ways, either fully coincided with the predictions of the theory of relativity, or differed from it by 7-8%. Both exclude most alternative theories of gravity.

These small discrepancies, as the scientists note, are associated with inaccuracies in measuring cosmological constants and velocities of stars in ESO 325-G004, and they can be eliminated by observing other gravitational lenses.