The turbulent past of a mysterious asteroid is revealed 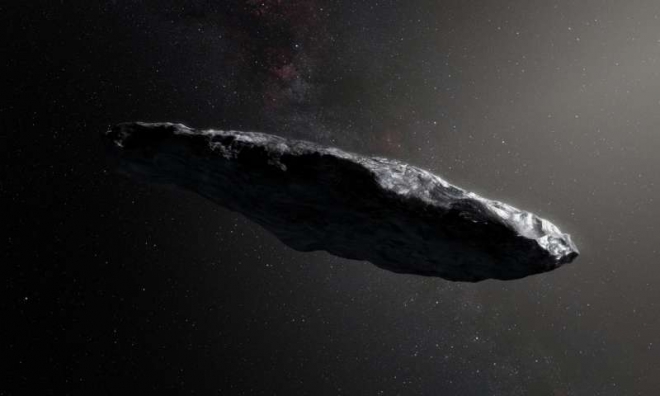 The asteroid Oumuamua, opened in October 2017, is the first interstellar guest found in our solar system. At first it was identified as a comet, but later it turned out that it was an asteroid in the shape of a cucumber. And now scientists have uncovered the turbulent past of the object, which made it chaotic to circulate in space.

Since October, a team of scientists from the Royal University in Belfast, with the participation of colleagues from other countries, has analyzed the measurements of the brightness of the asteroid. As a result, they found that Oumuamua did not rotate periodically, like most small bodies that we see in our solar system, but instead tumbled or rotated chaotically, and probably traveled for billions of years.

According to scientists, Oumuamua worked on another asteroid before being thrown out of its system into interstellar space. “Our modeling suggests that it will continue to somersault in space for many more billions of years before internal stress causes it to rotate normally. So far, we do not know the exact cause, but, as our calculations show, it was most likely thrown into interstellar space by interaction with another planetesimal in its system, “Dr. Fraser explained.

Until now, scientists could not determine the color of the asteroid – different measurements yielded different results. But a study by Dr. Fraser showed that the “cucumber” has a patchy surface, its side facing the telescopes on Earth was largely red, and the rest of the body was neutral in color, like dirty snow.

“Most of its surface is neutral, but one of its elongated sides has a large red area. It speaks of wide compositional variations, which is unusual for such a small body, “the author of the study noted.

The results of studies published in Nature Astronomy helped to build a more accurate model of Oumuamua. “Now we know what’s behind its unusual shape. This cosmic cucumber had a stormy past, because of which he said goodbye to his star and now randomly wanders in space. Our results help to make a more complete picture, and this is really an unusual object for our system. “