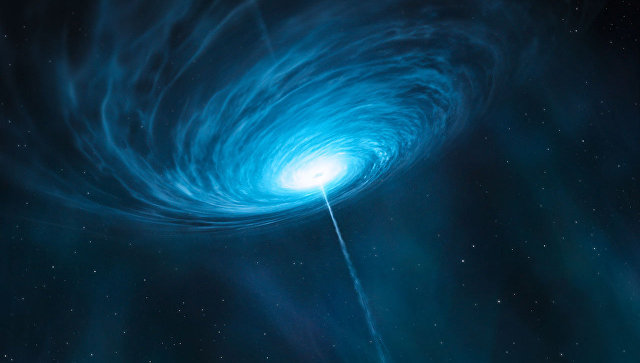 Observations of the farthest quasars have shown that supermassive black holes are one of the main reasons of why the Universe has begun to make much less stars, than usually, recently, that has led to her noticeable tarnishing.

At the center of the Milky Way and practically all galaxies there is a supermassive black hole, “conducting” processes of circulation of substance on all galaxy invisibly. For a long time astronomers consider that activization of such black holes leads to gradual devastation of a galaxy and the termination of processes of star formation as a result the black hole warms and throws out cold clouds of dust and hydrogen out of galaxy limits in which stars are born.

Relatively recently, as Frederick Hamann from university of California in Riverside (USA) tells, scientists have found the first proofs that it really occurs, however how this process influences visible tarnishing of the Universe for the last one billion years, remained to unknown.

The matter is that last year astronomers have found out that now the Universe produces almost twice less light, heat and other forms of energy, than she did it two billion years ago. The reasons of it aren’t clear yet, however most of astrophysicists believes that the quasars which have suppressed star formation in about a half of visible galaxies could be mixed in it.

Hamann and his colleagues managed to prove that this tarnishing is connected with activity of quasars, studying the farthest supermassive black holes found scientists within the BOSS project. This project is intended for searches of the “folds” in distribution of matter in the Universe which have resulted from action “echo” of the Big Bang. For this purpose astronomers study a range of the most ancient light sources and an arrangement of galaxies in “a space web” of the Universe.

Studying the most “red” and far quasars, authors of article have found in almost all from them one common and unusual feature which can explain why quasars have made the Universe of less bright, than she was earlier.

As it has appeared, nearly two hundred the farthest quasars possess unusually “flat” and continuous range indicating that we see them in almost “naked” look, not closed by a cloud from dust and gas which usually surround many inactive supermassive black holes today. It means that such quasars very actively absorbed matter and constantly “spat out” a part it back, thereby clearing away surrounding space from cold dust and gas, and depriving the galaxies of “star building materials”.

It is natural that this process couldn’t continue eternally, and many galaxies “have actually died”, having completely stopped formation of new stars because of activity of such black holes. As scientists believe, it explains why the Universe gradually “dies” today.