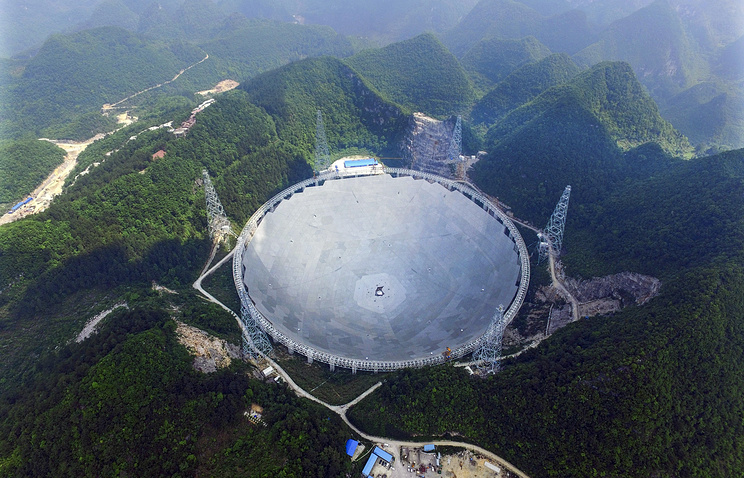 The request for use of the world’s largest FAST radio telescope (Five hundred meter Aperture Spherical Telescope) arrived to the Chinese scientists from participants of the American SETI project (Search for Extraterrestrial Life). As reported the Renmin Zhibao edition, the American scientists hope to accelerate by means of the new telescope process of search of life on other planets.

“We plan to begin partnership with FAST and national observatory of China”, – the representative of the Breakthrough Listen project Endryyu Simeon declared. “We can use the telescope along with the Chinese colleagues when they carry out the researches”, – the leading scientist of the SETI project Dan Vertimer added.

The edition reports that now the Chinese side didn’t give the answer. At the same time one of the Chinese scientists on the condition of anonymity expressed opinion that in the near future you shouldn’t expect a cooperation. “Our schedule of researches very dense. It is necessary to make very much that we will be able to offer nothing in the next two years”, – the interlocutor told.

The SETI project is supervised by the University of California in Berkeley and is implemented with assistance of NASA. Many scientific organizations from around the world participate in it. The idea of search of signals from possible reasonable inhabitants of other planets arose in the late fifties, and the early regular studies began in the 1970th. So far SETI wasn’t succeeded to find traces of extraterrestrial civilizations.

Results of the observations performed by experts of Breakthrough Listen till today include the most part of stars in a radius of 16 light years from Earth (including such stars as 51 Pegasus, known for availability of exoplanets), and also selection of the stars which are at distance of 16-160 light years from our planet. Among them sunlike, huge and numerous double stars are provided. Search was also directed to about 40 next spiral galaxies, including entering into group Maffey in the direction of the constellation Cassiopeia. Stars in a radius of 16 light years, available to observation only of the Southern hemisphere, – for example, Alpha Tsentavra, – will be studied until the end of the year with use of the telescope of Observatory of Parks.