The vortex spiral with the North pole of Mars 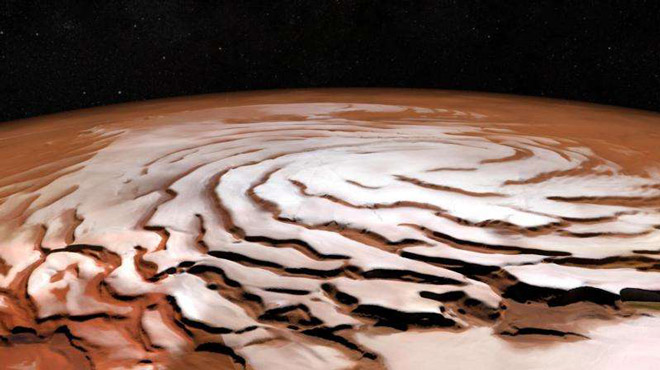 A new photo taken via satellite of the European space Agency’s Mars Express, shows the Northern polar ice cap of the red planet and its spiral troughs.

A mosaic image was prepared from 32 parts of images taken between 2004 and 2010, and covers an area of about one million square kilometers.

Ice cap on Mars is constant, but in the winter season as it is now, the temperature is low enough that about 30 % of carbon dioxide in the planet’s atmosphere settled on this cap, adding a seasonal layer a metre thick. In the warm summer months a large part of the ice, the carbon dioxide turns directly into a gas and escapes into the atmosphere, leaving behind water-ice layers.

Scientists believe that an important role in the formation of the ice caps play strong winds blowing from the Central plateau to its bottom edges and twists the same Coriolis force that causes hurricanes earth moving in a spiral.

One of the most prominent features of the Martian polar terrain is 500-km long trench to a depth of 2 kilometers, which almost cuts the cap in half. It is called the Canyon of the North (lat. Chasma Boreale) and is considered relatively old form of the relief formed between the dusty-icy spirals, which is becoming deeper with the growth of new ice deposits.

Subsurface studies by means of radar instruments on Board the automatic interplanetary stations Mars Express (ESA) and Mars Reconnaissance Orbiter (NASA) showed that this cap consists of many individual layers of ice and dust with a thickness of about 2 kilometers.

The data obtained provide valuable information about how to change the climate of Mars over the hundreds of thousands of years as it changes its orbit and the inclination of the rotation axis.