Every second Sun-like star can have a rocky planet with oceans of liquid water. That is, there may be about 300 million habitable worlds in the Galaxy, even if only the planets of sun-like stars are taken into account.

This optimistic conclusion was made in a scientific article accepted for publication in the Astronomical Journal. In the meantime, you can familiarize yourself with its preprint.

Astronomers relied on data from the Kepler space telescope. This planet hunter was launched in 2009 and shut down in 2018 when it ran out of fuel.

Kepler observed only 0.25% of the entire celestial sphere. Approximately the same area can be closed with the palm, stretching out your hand to the sky. Nevertheless, in nine years of work, he discovered more than 2800 exoplanets, the existence of which has already been confirmed by independent observations (several thousand more candidates are awaiting confirmation). Moreover, several hundred confirmed worlds are in the habitable zones of their suns. Recall that the habitable zone is the space around the star, in which it is not too hot and not too cold for the existence of liquid water on the planets. 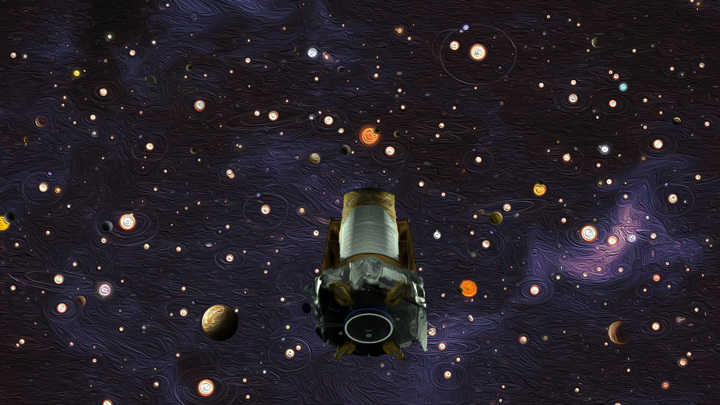 Let us assume that the site explored by Kepler is typical of the Galaxy. Then how many habitable planets can there be in the entire Milky Way?

In answering this question, the authors set strict limits for themselves. So, scientists considered only planets with a radius of 0.5-1.5 Earth (such bodies are probably rocky, like the Earth).

In addition, the experts were only interested in sun-like stars. Recall that the Sun is a dwarf with a surface temperature of 5500 ° C. The researchers paid attention only to dwarf luminaries with temperatures from 4500 ° C to 6000 ° C. Yellow dwarfs (the class of stars to which the Sun belongs) and some of the luminaries of neighboring classes fall into this interval.

No matter how narrow this range is, stars from different ends emit different amounts of light. To take this fact into account, the researchers used data from the Gaia orbiting telescope. Thanks to this, scientists more accurately than usual calculated the width of the habitable zone for each type of luminary.

Of course, the temperature on an exoplanet also depends on the presence and composition of the atmosphere. But even the most conservative estimates of its impact have led astronomers to a surprising conclusion. Every second sun-like star can have a rocky planet with liquid oceans! If we evaluate the impact of the gas shell more optimistically, then three-quarters of the sun-like luminaries can boast of such a world.

Meanwhile, even with an estimate of 50%, it turns out that there are 300 million sun-like stars in the Galaxy that have at least one potentially inhabited planet. Moreover, three or four such systems should be found within 30 light years from Earth.

Note that from the very beginning, small and cold stars unlike the Sun – red dwarfs – were excluded from the study. Meanwhile, they make up more than 70% of the luminaries of the Milky Way, and many earthlike worlds have already been discovered in their habitable zones. So, in fact, the Galaxy may turn out to be an even more welcoming place.

However, verifying the authors’ findings will not be easy. A planet in the habitable zone of a sun-like star, by definition, is approximately the same distance from its sun as the Earth is from its own. This means that it turns around him in about a year. But to confirm the existence of an exoplanet, you need to observe at least three of its revolutions around the star. That is, each area of ​​the sky needs to be observed for three years. It is easy to calculate that at such a rate it would take Kepler 1200 years to ransack the entire celestial sphere. Even its successor TESS, which has a much wider field of view, would have spent about 90 years doing this.