Thermal images help to reveal the origin of Phobos 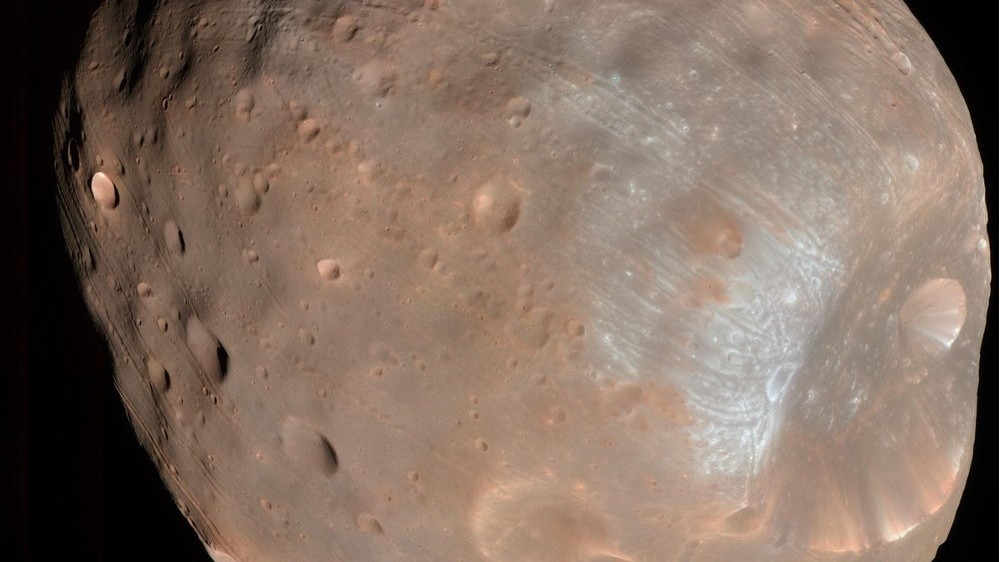 NASA has released the new images of the Martian moon Phobos, which may shed light on the origin of the mysterious satellite.

Scientists are not sure whether the barren moon is an asteroid that was captured by the gravitational pull of the Red Planet, or was formed from debris from the collision of Mars and another object of the Solar System in the distant past.

Phobos is the largest moon of Mars, its radius is more than 11 km (6.8 miles), but it is small compared to other satellites of the solar system, such as the Earth’s Moon or Saturnian Enceladus.

The satellite is approaching the Red Planet at a speed of 1.8 m per year, and it is destined to end its life either by colliding with Mars after about 50 million years, or by breaking with gravity. If the last scenario comes true, the wreckage that once was the moon will settle, forming a ring around Mars.

Recently published images of Phobos were taken by NASA’s Mars Odyssey spacecraft, which collects data and captures images of the Martian system from its arrival in 2001. It also serves as a vital means of communication between other robots on the surface of Mars and the Earth. 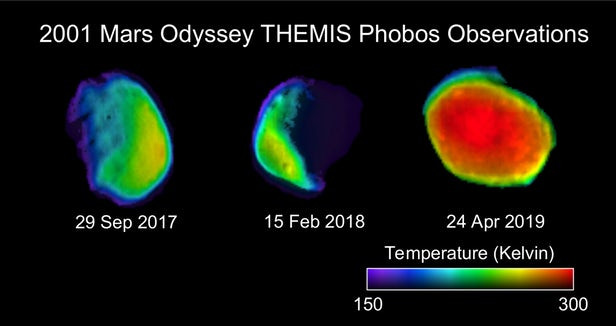 The last photo shoot of Mars Odyssey occurred when Phobos was in the “full moon” phase relative to the spacecraft. This means that at the time of data collection, the Sun was located directly behind the orbiter, fully illuminating the Martian satellite.

“This new image is a kind of temperature apple — the warmest in the middle and gradually becoming cooler,” said Jeffrey Plaut, a Mars Odyssey project researcher at NASA’s Jet Propulsion Laboratory. “Each observation on Phobos is carried out at a slightly different angle or time of day, providing a new type of data.”

Side shots of the moon are more useful for recognizing the texture and features of the surface of Phobos; full moon observations are invaluable for scientists trying to figure out what the celestial body consists of.

Different minerals and metals reflect and emit different amounts of heat. Scientists can look at thermal images taken by Mars Odyssey to better understand the content of certain materials on the moon and see how they are mixed with other minerals.

On April 24, 2019, NASA scientists ordered an orbiter to use the THEMIS system for detailed measurement of the surface temperature of Phobos. This information can help determine if the moon is just a big asteroid or made from materials of the planet itself. The data collected is not enough to confirm the origin of the moon, but this is a step in the right direction.

In the near future, Phobos will visit another robotic mission – the JAXA mission Marxi Moons eXploration (MMX). Unlike Mars Odyssey, the MMX will be able to land on the moon and get a sample to return to Earth. The mission is scheduled for launch in 2024, with the possibility of returning to Earth in 2029.

Looking even further into the future, scientists even considered the prospect of placing human shoes on the surface of Phobos as a sign of a possible mission with the crew on Mars itself.

“By studying the features of the surface, we find out where the most rocky places on Phobos are, and where there is fine dust,” comments Joshua Bandfield, co-researcher at THEMIS and senior researcher at the Institute of Space Sciences in Boulder, Colorado. “Identifying landing hazards and understanding the space environment can help future missions land on the surface.”