Thirty years of observations of supernova 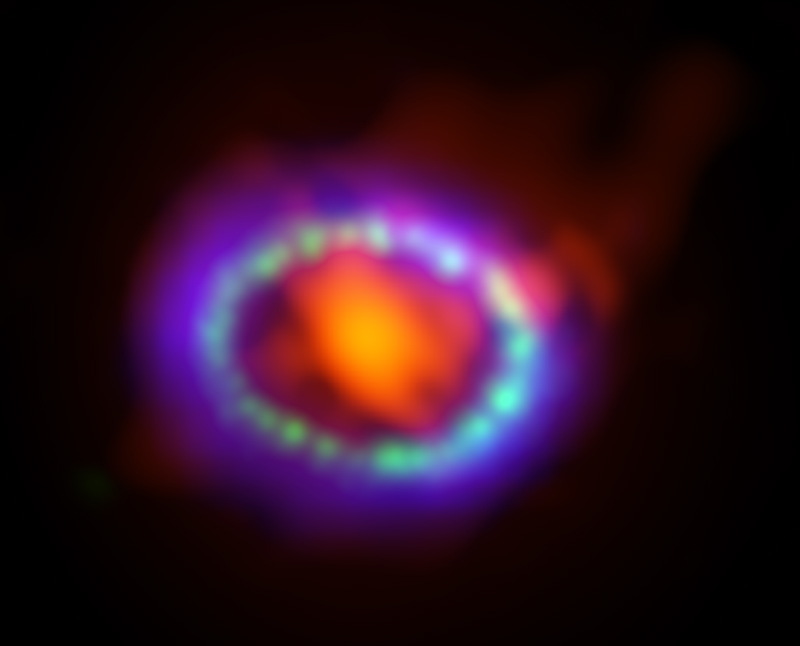 Thirty years ago, astronomers spotted one of the brightest exploding stars over four centuries. Colossal supernova 1987A (SN 1987A) exploded with the power of 100 million suns for several months immediately after its opening on 23 February 1987.

Since the first observation of SN 1987A has continued to surprise astronomers with its spectacular light show. A supernova explosion in the Large Magellanic cloud lasted hundreds of years and gave astronomers a chance to study the different phases of the life of a star before and after her death.

In honor of the thirtieth anniversary of the discovery of SN 1987A has been published the new pictures, time laps video, animation and three-dimensional model.

“Hubble” is constantly observed for SN 1987A since 1990, having accumulated hundreds of images, Chandra — since 1999. ALMA, a powerful set of 66 antennas, millimeter and submillimeter collected information about SN 1987A with its birth.

The latest information from these powerful telescopes indicates that SN 1987A has crossed an important threshold. The shock wave from the supernova is moving beyond the dense rings of gas formed when the star was in the status presernova. The formation started when the fast wind from the star has faced with the slow wind that is created in the red giant phase, the early period of the evolution of stars. 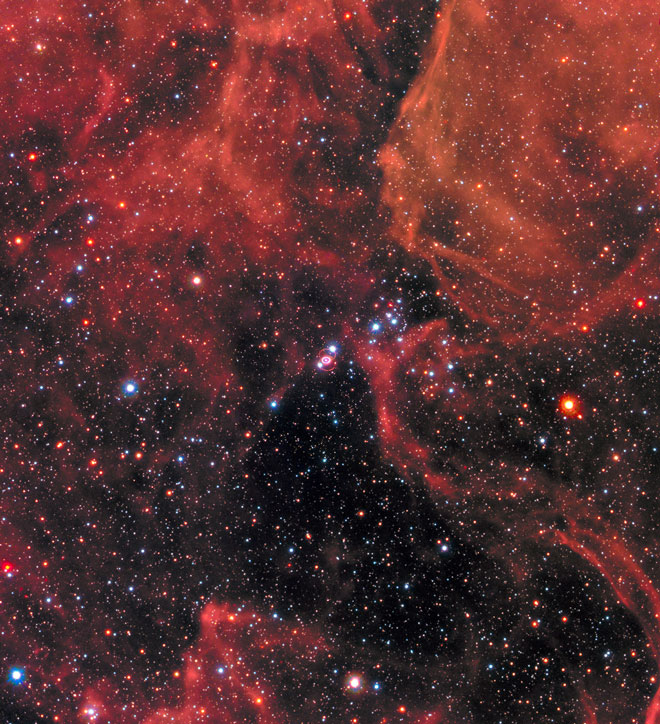 A supernova like SN 1987A, may “shake” the surrounding gas and trigger the formation of new stars and planets. Gas, through which the stars and planets are formed, enriched in carbon, nitrogen, oxygen and iron — the basic components of life. These elements are formed inside presernova star and during the supernova explosion, and then scattered across the galaxy.

Research “Hubble” showed that a dense ring of gas around supernova glows in optical light and reaches a diameter of about one light year. The ring has existed for 20 thousand years before the supernova explosion. The flash of ultraviolet light from the explosion of a charged gas in a ring of energy, forcing it to Shine for decades.

The Central structure, visible inside the ring in the image of Hubble, has now reached 0.5 light-years in diameter. Most notably — two bubble fragments in the center of the remains of a supernova, rushing apart at speeds of 32 million km/h.

From 1999 to 2013. the data “Chandra” showed the growing ring of x-ray emissions, which steadily grew brighter. The blast wave from the original explosion is broken and heats gas ring around supernova, producing x-ray emission. 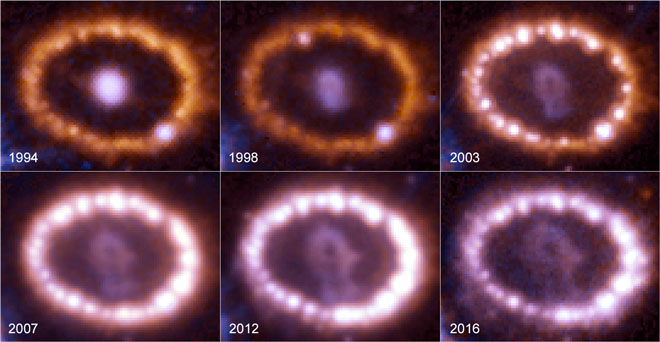 Over the past few years, the ring has ceased to become brighter. From February 2013 until the latest Chandra observations in September 2015, the total volume of low-energy x-rays remained constant. The upper left part of the ring is beginning to fade. These changes prove that the blast left the ring and was in a region with a less dense gas. This marked the end of an era SN 1987A.

Astronomers are still looking for evidence of a black hole or neutron star left after the explosion. They watched the flash of neutrinos when a star exploded and we are confident that the compact object formed in the center of the star is a neutron star or a black hole. But telescopes still nothing concrete could not see.