The UFMG 1, UFMG 2 and UFMG 3 clusters were found in the Sagittarius arm.

Open clusters are formed from one giant molecular cloud and are groups of stars that are weakly gravitationally related to each other. Currently, more than 1,000 of them have been discovered in the Milky Way, and scientists are still searching, hoping to find many of these star groups. Expanding the list of known galactic open clusters can be crucial for improving understanding of the formation and evolution of our galaxy. 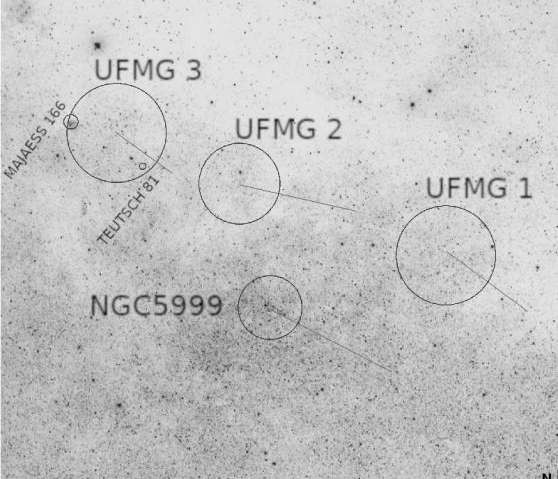 An astronomer group led by Filipe A. Ferreira from Federal University of Minas Gerais in Belo Horizonte, Brazil, reports identifying three new open clusters in the Sagittarius arm, in the area of ​​the cluster NGC 5999. Analyzing data from Gaia Data Release 2 (DR2), concerning the area adjacent to NGC 5999, they noticed the existence of other clusters that have not yet been reported in previous studies.

“We are reporting a happy discovery of three new dispersed clusters called UFMG 1, UFMG 2 and UFMG 3 in the cluster area NGC 5999, using data from Gaia DR2,” the statement said.

The newly identified clusters are located at a distance of about 4900 light years from Earth and contain several hundred stars. According to the researchers, the age of clusters is from 0.1 to 1.4 billion years.

In addition, astronomers noted that UFMG 3 is in the sky next to two other known clusters: Majaess 166 and Teutsch 81.