To the asteroid Bennu will send a space probe 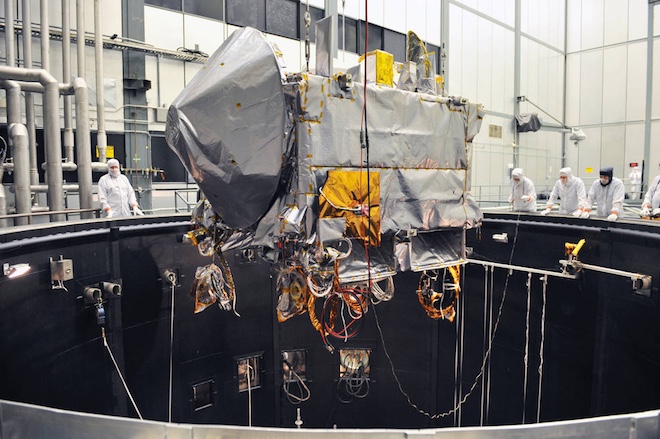 NASA plans to launch the spacecraft OSIRIS-REx (Origins Spectral Interpretation Resource Identification Security Regolith Explorer) 8 Sep. The launch will take place from the spaceport at Cape Canaveral with the help of the carrier rocket Atlas V United Launch Alliance, the goal of specialists is to get into a two-hour launch window from 2:05 on the night of September 9 in Moscow.

OSIRIS-REx is a space station, which will have to deliver to Earth soil samples from asteroid (101955) Bennu. This mission won the contest of the NASA “New frontiers” (New Frontiers). It is planned that the plant will reach the asteroid in 2018, and the ground will be brought to Earth in 2023. After the station reaches the asteroid, it will go into low orbit height of 4.8 km above the surface and about 500 days will maintain its mapping, after which the mission team will determine the most appropriate place for the collection of soil samples. Interestingly, landing on an asteroid in the project plans is not included — sampling of soil (about 60 grams) will be produced using a long paddle. It will then be placed in a capsule and delivered to the Earth.

(101955) Bennu was opened in 2013 and received its name in honor of the Bennu bird which represented the soul of Osiris. Its provisional designation 1999 RQ36. This small near-earth asteroid is in the group of Apollo, it has a diameter of about 510 m. the Asteroid rotates around the Sun for 1.2 years, its orbit is elliptical. According to the calculations of a group of scientists under the leadership of Oscar Arratia of Valladolid University, the probability of it falling to the Ground is 1/4000, it can occur in the period between the years 2169 and 2199. In NASA the asteroid is considered the most dangerous object to our planet — his fall would have been equivalent to the explosion of 2,700 megatons TNT.

However, the choice of the asteroid for the study of absolule also the fact that it belongs to the spectral class — this will allow scientists to investigate carbon substance that has been preserved from the time when the Solar system was formed.