Starlink is a project of a near-Earth satellite system developed and implemented by SpaceX to create a cheap and high-performance satellite Internet communication channel and technical transmitters for receiving and transmitting signals from the earth and orbit. A good goal, but is it really so?

Is it really that simple and altruistic? Now the mass of satellites, which have already been put into low orbit, is flying over our heads, including if astronomers swear that these echelons of satellites prevent them from photographing the stars, then the rest of the inhabitants are only touched by looking at these luminous trains of American satellites flying in the night sky.

You know the saying “Do not wash, so skate”, this satellite network, which has just begun to entangle our planet, is the very “skating” with which the United States plans to roll the whole world under its complete domination.

It is difficult to frighten any of the strongest opponents with nuclear weapons – you can get change in the same nuclear. Aircraft carriers can only be scared that there are whales in the ocean, and formidable shouts no longer affect even North Korea or Iran.

What to do? Create a total control system and a combat network of thousands of satellites that will monitor each step of opponents and ordinary citizens, the movement of enemy troops, etc. etc. These satellites can also be weapons. yes – weapons. Ordinary bomb flying in low orbit.

If an opponent like North Korea has a nuclear bomb, then it can counter the sudden drop of 50 satellite bombs, which in minutes will destroy all important defense sites, including launching sites for launching missiles.

And this applies not only to North Korea, but to any country in general. Any country that dared not bend under the American hegemonic boot.

The Ilona Mask StarLink satellite network is nothing but one of the new tools of the Pentagon, thanks to which they hope to gain the possibility of global dominance on our planet Earth.

To date, SpaceX has launched 360 Starlink satellites, with more than 12,000 planned to launch.

Here is the video that one of our readers sent us filmed 30 satellites flying over the south of the Voronezh region.

Beautiful “train”? But some manage to take the moment of intersection of two groups of satellites in converging orbits. What happens at this moment? The satellites are not just flying past each other, they are testing a laser communication system. Satellites of the two groups “communicate” with each other. 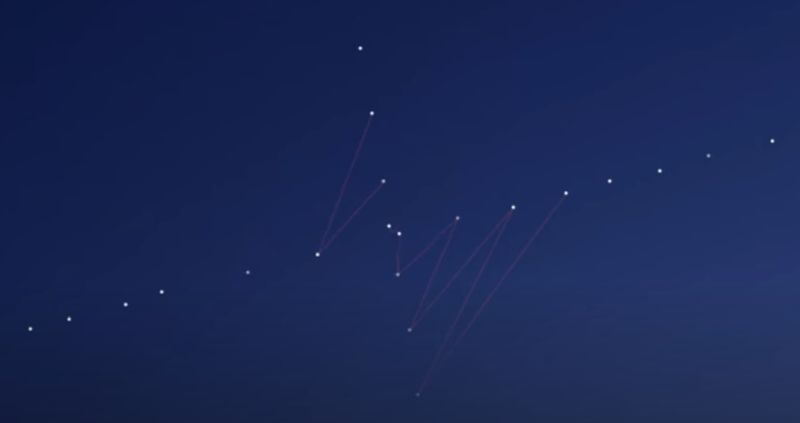 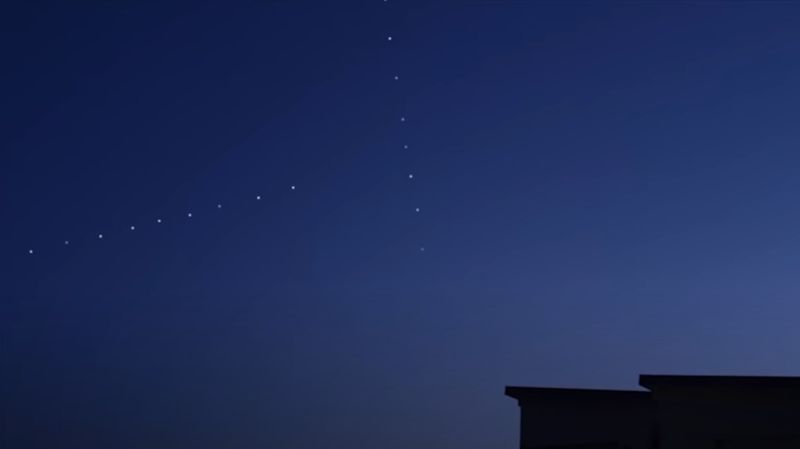 Laser beams are not visible to the human eye because their wavelengths are not in the spectrum of visible light. Digital cameras can capture a wider range of wavelengths, so it can be seen in video or photographs to see these laser beams.

This whole situation is reminiscent of one episode from the Star Trek science fiction film, The Tolian Web. But what’s really happening now is not a movie at all, but the result may be similar to a plot from science fiction – the United States will entangle the Earth with its satellite network, which will enslave humanity once and for all.

The main purpose of the StarLink satellite constellation is not the distribution of free Internet in an attraction of unprecedented generosity, but the creation of a global network of combat control and intelligence.

According to published data from the Pentagon’s Space Program Development Agency, by the end of 2022, the U.S. Army wants to have a new constellation of satellite devices in low Earth orbit. The purpose of this satellite constellation is to monitor the launches of air and space objects, target designation and search for ground targets, remote sensing of the earth in various ranges. 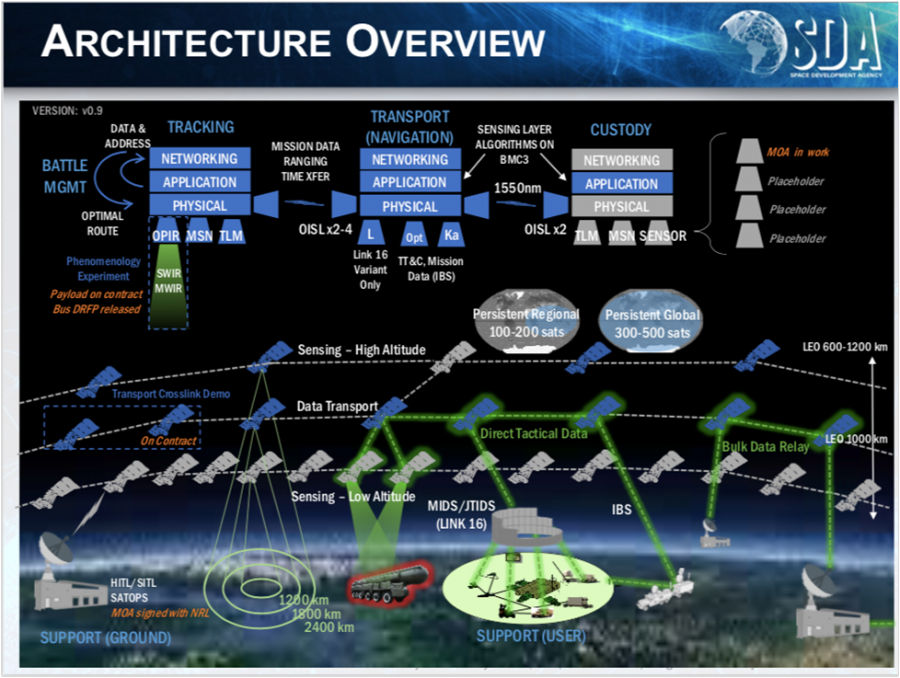 Using these tools, the SDA plans to create a large number of satellite devices that will be used for the direct transmission of data to military personnel.

According to plans, by 2024 it is planned to deploy a sufficient number of satellites for a global solution to reconnaissance and combat missions.

The Ilona Mask project is in fact a project of Petagon, and when 12,000 satellites “for free distribution of the Internet to the countries of Africa” ​​will be deployed in low orbit, the Pentagon will have thousands of devices that will be combined into several layers of the matrix satellite structure. 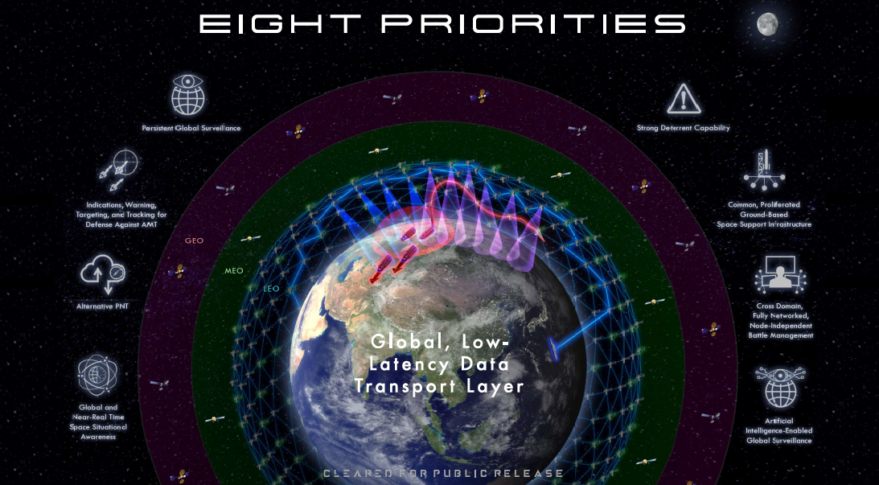 Eight levels of the space matrix constellation of satellites:

But these are only stated goals and objectives, and what is hidden in the secret part of this project? After all, any of the 12,000 satellites can be a nuclear bomb, which can be dropped from a low orbit to the desired places by command, because do not forget that all these satellites are controlled and in low orbit.

Is it a coincidence that the Pentagon’s space program development plans coincide so much with Elon Musk’s plans to create StarLink low-orbit satellite constellation?

Interestingly, after highlighting its plans, the Space Development Agency (SDA) realized its mistake and allegedly abandoned plans to create a new set of tracking satellites designed to deter opponents in space.

They acted smarter and did not make noise, used a dummy who supposedly with good intentions launched hundreds of satellites into orbit.

The Pentagon has already begun through Ilona Mask to deploy its first global intelligence system in the form of the StarLink satellite constellation. According to plans, the test of this system should be completed in September 2020.

Agree, this is an ideal cover. 12,000 satellites launched by a private company at their own private means, ostensibly in order to shed heaven on mankind in the form of cheap, and for many of the poorest countries, free Internet.

That’s just when everything is finished, instead of the manna of the heavenly Internet, a completely different substance can spill that will turn humanity into prisoners on a planet called Earth.

The prisoners on the Pentagon’s Tolian Web …