Tom Peske: “The planet is a precious stone” 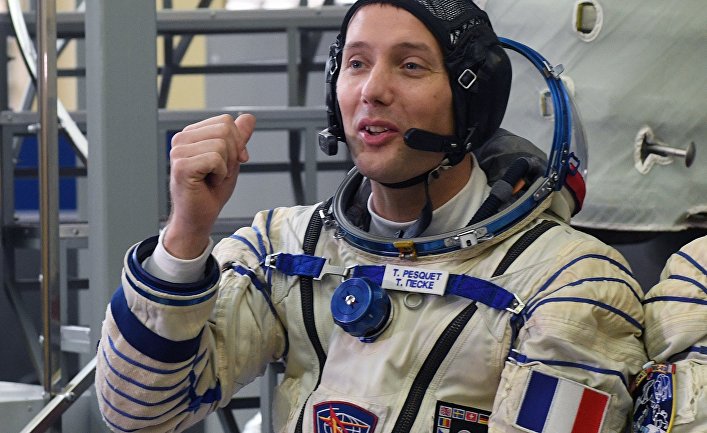 Before flying to the ISS in November 2016, Thomas Pesquet thought that his return in the descent vehicle Soyuz would be one of the most anticipated moments of his mission. “It’s like the last circle on the carousel,” he said cheerfully. Together with the Russian cosmonaut Oleg Novitsky, who ran a capsule with a diameter of 2.2 m and a height of 2.1 m, the French explorer made a descent at a frenzied speed of 28 thousand km / h! Landing occurred at the estimated time in the Kazakh steppe, more than three hours after their ship broke away from the ISS.

A few minutes after his landing, he exchanged a few words with Emmanuel Macron, who was at the National Space Research Center in Paris. Tom Peske told the president that he was going to Cologne. The head of state appointed him a meeting on June 19 and noted that all the French are proud of him.

Already on Tuesday the young man gathered his suitcase in two shoe boxes. It was necessary to leave nothing there. From time to time the ISS is cluttered with various objects. It is not clear whether it will be possible to bring a saxophone to the ground, which was delivered on a cargo ship for his birthday, on February 27. In addition to personal things, the “Soyuz” sends data to scientific experiments (samples or hard drives). Dirty clothes will be destroyed in a garbage truck.

Mission Proxima of the tenth French astronaut came to an end after six and a half months spent in the closed space of the ISS, with an inhabited area of ​​400 m3 for astronauts. This is comparable to the size of an apartment of 130 m2 with a three-meter ceiling in which 4-5 people live. For 196 days (the record duration of the flight for the French cosmonaut). When summing up his trip, the former pilot of Air France stressed that what he most lacked, of course, except for the family, this sense of freedom: “Go out into the street, ride a bike, go to the mountains, to the sea, to feel on Imagine animal sensations: wind, rain, different smells. ” He did not complain about food (“nothing special”) or “camping-toilet”, which he had to repair on the second day of his stay on board.

But basically, Tom Peske had only positive emotions. This is an unforgettable feeling of start from Baikonur, and a daily meeting of sixteen dawns on the ISS, and life in weightlessness, as well as two space walks in a spacesuit in January and March for maintenance work, during which he held the station with one hand and saw, As the Earth rotates 400 km under his feet. The 39-year-old astronaut felt great in this work, which caused admiration of his colleagues.

“Working for the ISS is a huge collective effort,” Toma said. In total, a Frenchman from Normandy participated in hundreds of scientific experiments, including sixty at the request of the European Space Agency (ESA) and the French CNES. ISS passengers are real cowboys subjected to numerous experiments in order to better understand the effect of weightlessness on the human body. But they also conduct fundamental experiments in physics, including studying the behavior of liquids and materials under zero-gravity conditions, and in biology, such as growing vegetables.

Toma talks about the experiment on the special Muses Atrophy Research and Exercise system rack, which allowed the expedition members to test the work of seven joints and evaluate the strength of the muscles associated with these joints. (During a prolonged stay in conditions of minimal gravity, many muscles weaken – prim.red.).

Most of the experiments conducted should help prepare future foreign missions in the solar system. Whether it is the creation of a lunar village, a flight to one of the asteroids or to Mars. Tom Peske “dreams” to fly to the Red Planet. “But if it’s not me, it does not matter. It is important that it is a European or even another French astronaut. “After his stay in space, the astronaut is more acutely aware of the ecological fragility. “There are things that we can understand with the mind, but not with the heart. We do not understand how fragile the atmosphere is, that in a single moment it is possible to harm the entire planet, and that it is necessary to protect it. The planet is a precious stone. ” The young astronaut spent most of his free time photographing the Earth from different angles. He has posted hundreds of great images and videos depicting landscapes, aurora borealis, famous places and illuminated cities on social networks throughout his journey. “It was my dream to be so high, and it would be selfish not to tell others how cool it was.” In his spare time from experiments, Tom Peske talked with the public, in particular on Twitter, talked a lot with students and students.

And the last. “I made a small digression in my normal life to be in space. It was just great. It’s a little sad for me to leave this environment, because I do not know if I can ever go back there. And at the same time, I’m happy, because six months is a long time. And I look forward to meeting with my family and I want to plunge into life on Earth again! “