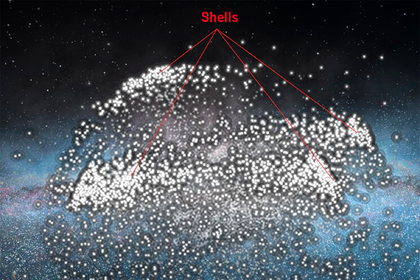 Scientists at the Rensselaer Polytechnic Institute in the United States have found traces of the collision of the Milky Way with a dwarf galaxy three billion years ago. The giant catastrophe led to the appearance of characteristic structures from stars found in the vicinity of the constellation Virgo. The discovery is reported in an article published in the Astrophysical Journal, and the study is summarized in a press release on Phys.org.

Astronomers have identified an unusual density of stars called Virgo Overdensity. Some luminaries moved towards the Earth, others receded, which was unusual for a star cluster, in which all stars move in concert. Given the new data, the researchers hypothesized that the excessive density was the result of a radial merger when the dwarf galaxy collided with the Milky Way.

The unusual structures are curved planes formed by stars when the dwarf galaxy has passed near the center of the Milky Way several times. Each time, gravity pulled her backward, forcing her to oscillate around the core and scatter clusters of stars. The simulation results showed that the first time a dwarf galaxy passed the center was 2.7 billion years ago.