Traces of another asteroid seen on Bennu 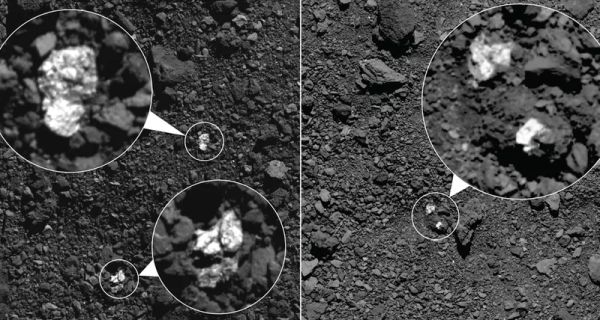 NASA’s OSIRIS-REx spacecraft has discovered several strange light-colored rocks on the surface of asteroid Bennu. Scientists believe that it is likely a completely different and much larger asteroid.

OSIRIS-REx traveled to Benn in 2016 and reached it in 2018.Since then, the tiny spacecraft has been closely studying the 500-meter asteroid. As early as October this year, OSIRIS-REx will land on Bennu’s surface to take a sample. In the meantime, scientists can build theories about the origin of the asteroid only from OSIRIS-Rex images. Recent findings suggest that Bennu appears to be composed of pieces of another large object.

“We found six boulders, about 1.5 to 4.3 meters in size, located in the southern hemisphere of Bennu and near its equator,” said Danielle Dellagustina, lead author of a new article published in the journal Nature Astronomy. “They are much brighter than the rest of Bennu and look like material from the asteroid West. According to the images taken by the OSIRIS-Rex camera, these boulders appeared ten times brighter than their surroundings. ”

The asteroid Vesta was discovered over 200 years ago by the German astronomer Heinrich Wilhelm Matthias Olbers. Vesta is one of the largest objects in the main asteroid belt, with a length of more than 500 kilometers. Scientists believe that it accounts for about 9% of the mass of the entire asteroid belt.

By analyzing the readings from the OSIRIS-Rex spectrometer, the team found that the light boulders were likely composed of the mineral pyroxene, the material that was seen on Vesta. The team concluded that these rocks are unlikely to have formed on Bennu itself, because pyroxene forms at extremely high temperatures, and the asteroid itself would hardly be able to withstand such congestion, since it mainly contains aquiferous minerals. A powerful blow also could not have led to such temperatures, as it would have led to destruction.

However, now scientists can only speculate and wait for OSIRIS-Rex to take the material from Bennu and deliver it home. If all goes according to plan, OSIRIS-Rex will complete the fence in October and bring it back to Earth in 2023. “We look forward to the return of a sample that we hope contains pieces of these intriguing rock types,” says Dante Loretta, head of mission for OSIRIS-REx.