Traces of the collision of the Milky Way and another galaxy 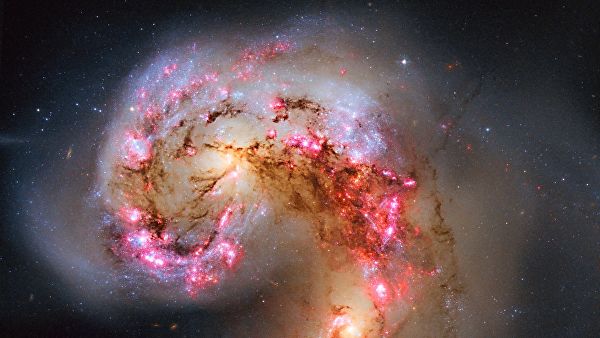 The GAIA astronomer probe helped astronomers to find out that about 2-3 billion years ago, our Galaxy experienced a powerful outbreak of star formation after it had collided with one of its neighbors. Evidence of this was published in the journal Astronomy & Astrophysics.

“We measured the exact distances to three million stars around the Sun and found out that the Milky Way did not evolve as we previously thought. About five billion years ago, it experienced some kind of external perturbation, it most likely collided with another galaxy,” Roger says Mor (Roger Mor) from the University of Barcelona (Spain).

The Milky Way is not one in the intergalactic void, but in the company of a whole suite of dwarf galaxies, most of which we do not see because of their extreme dullness. As scientists believe today, many of these dwarfs periodically draw closer to our galaxy, the final “traces” of which are the so-called star currents.

They resemble original “ribbons” of stars not connected with each other by gravity, which rotate around the center of the Milky Way above and below its disk, where the Earth, the Sun and almost all other stars are located. Star streams, as astronomers now believe, are remnants of globular clusters or dwarf galaxies, once torn apart or absorbed by the Milky Way in the distant past.

In the course of these apocalyptic events, astronomers found out six years ago while observing the so-called “ring of the unicorn”, one of the most noticeable stellar flows, the Milky Way “steals” almost all dark matter from the galaxies it tears. As a result, they break up into pieces and turn into those tapes that we can see today in the night sky above the disk of the Galaxy.

The discovery of traces of such “cosmic accidents” has long forced astronomers to think about what role they could play in the life of our Galaxy and in its evolution in the distant past. As observations of other galaxies show, large collisions between them occur quite often, and it is not yet clear what factors control their consequences.

Mohr and his colleagues unexpectedly approached the answer to this question by analyzing the data that the GAIA probe receives – a European mission launched five years ago into space to accurately calculate the coordinates of more than a billion stars of the Milky Way.

Spanish astrophysicists and their French colleagues were interested in how much distance the Sun separated from the three million luminaries nearest to it. These data, as scientists hoped, were to help them understand the circumstances in which our light formed and what the Galaxy looked like at the time of its birth.

Both are related to the exact distances between the stars, for the reason that the age of each of them cannot be accurately calculated without knowing its absolute luminosity – the further away the next “neighbor” of the Sun is from us, the dimmer it will look. Accordingly, knowing the distance to them and the exact mass of these stars, one can understand when they arose and how often such stars were formed in the distant past.

These measurements led to an unexpected discovery. Initially, scientists expected that the total frequency of star formation in the Milky Way will gradually decrease due to the gradual depletion of the reserves of neutral gas in the disk of our Galaxy.

In reality, everything was completely different – a similar trend was characteristic only for the most ancient epochs of the life of the Milky Way, starting from 10 billion years ago and ending 6-7 billion years ago. About five billion years ago, a certain event took place, as a result of which the frequency of birth of new stars began to grow rapidly, reaching a peak of 2-3 billion years.

During this time, as the calculations of scientists show, a huge number of new stars have appeared, whose total mass is about half of the weight of all the luminaries in the Milky Way. Only a billion years ago, the star formation rate dropped to “pre-crisis” values, when new reserves of “star building materials” were exhausted.

Their source, according to the authors of the article, could be just another fairly large galaxy, which collided with the Milky Way about seven to five billion years ago. Its traces may still remain within its limits, which opens up new opportunities for studying the process of evolution of galaxies, their life and death, the scientists conclude.