Traces of the “collision” of the solar system with another star 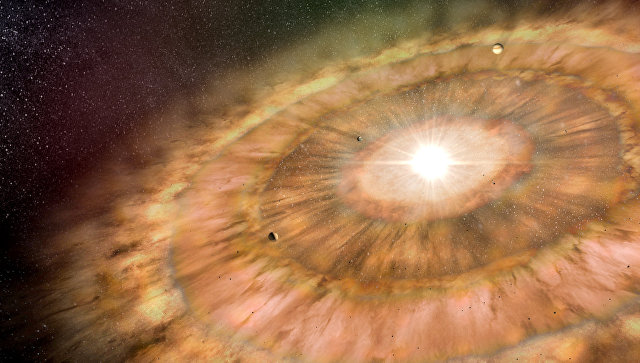 Unusual properties of Uranus and Neptune, as well as anomalies in the position of dwarf planets indicate that the solar system “collided” with another star in the first moments of his life. This conclusion was reached by astronomers who published an article in the Astrophysical Journal.

“The span of the star through the solar system is a more realistic alternative to the set of hypotheses that now explains the unusual features of our planetary family.” In contrast, we added to the classical model of its formation only one new factor, the second star, and the mechanism of its action, which leads to the emergence of all known anomalies, “explains Susanne Pfalzner from the Institute of Radio Astronomy in Bonn, Germany.

Four years ago, an amateur astronomer Ralph-Dieter Scholz discovered, as it seemed to him, quite an ordinary star – a red dwarf WISE J0720. Now he is in the constellation Unicorn, at a distance of about 20 light years, that is, it is one of the closest stars to the Earth.

Two years ago, American astronomers discovered that the star of Scholz comparatively recently, about 70 thousand years ago, flew through the solar system. She approached the Sun at a record-breaking distance, about two light years, changing the orbits of many comets and small celestial bodies in the far part of the Oort cloud.

This discovery, as noted by Pfalzner, made many planetologists think about how such a convergence of the Sun and other stars could affect the appearance of the solar system. Such meetings, according to a number of researchers, could often occur in the first moments of the life of the luminary, when it still did not leave the “star crib”, where dozens of other stars were born in the company.

For example, the convergence of the Sun and another star can explain why the orbits of Sedna, Biden and many other dwarf planets are unusually elongated and are specially inclined in relation to the “pancake” of the rest of the solar system. At the same time, they travel far enough from the Sun to be recognized as part of the Oort cloud, where such behavior is “permissible” from the theoretical point of view.

Palatzner and her colleagues checked whether this was really so, after having calculated several dozen variants of such a “rendezvous” of the Sun and its neighbors. To do this, they created a virtual model of the gas-dust cloud, where the newborn solar system was originally located, and began to push it with luminaries of different masses and sizes.

As these calculations have unexpectedly shown, the “collision” of the solar system and another star, whose mass is approximately equal to or slightly below the solar one, explains not only the strangenesses in the position of the dwarf planets, but also reveals almost all the other riddles of the “cradle of mankind.”

In particular, the passage of another star at a distance of about 15 billion kilometers from the Sun will lead to the fact that it will “steal” about two-thirds of the protoplanetary disk. This explains well why the Kuiper belt breaks sharply and becomes noticeably less dense around the same place where Neptune’s orbit passes.

Likewise, this collision explains why Neptune is heavier than Uranus, despite the fact that it is further away from the Sun and rotates in an unusual orbit. In addition, this idea allows us to resolve another contradiction – how both of these planets could form at the distant approaches of the solar system, where the protoplanetary disk was not sufficiently dense for the birth of gas giants.

How likely is this event? As calculations of scientists show, something similar can happen to any newborn star with a probability of approximately 20-30 percent in the first few tens of millions of years of her life.

According to Pfalzner, this advantageously distinguishes the idea of ​​her team from other hypotheses that describe the formation of the solar system, since they include several random factors that can simultaneously occur with significantly less chance.