Tremendous declines are observed by astronauts of the ISS 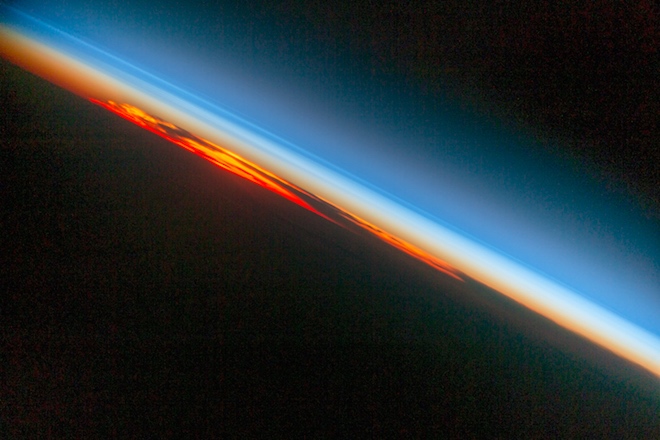 The astronaut onboard the International Space Station (ISS) has photographed a decline, a similar huge tongue of flame. A look in a profile on the setting sun, Earth which has plunged into darkness, clouds — it is certain one of those photos which immortalize space flights.

Thin layers of light and dark shades of blue mean a set of layers of the atmosphere. The lowermost layer — the orange-brown line with clouds, dust and smoke — is known as the troposphere where weather which we feel is formed. Smoke and particles of dust in the atmosphere give to declines characteristic red color.

Astronauts see the atmosphere of Earth such approximately each 90 minutes as observe 16 dawn and 16 declines every day. Astronauts often speak about to what thin and fragile the terrestrial atmosphere seems.
The picture at number ISS049-E-49442 has been taken on October 27, 2016. The picture was made by the member of an expedition of the ISS-49. At the space station there are special tools by means of which astronauts and astronauts do pictures of scientific importance and just remove beautiful types. The best photos become property of the public.