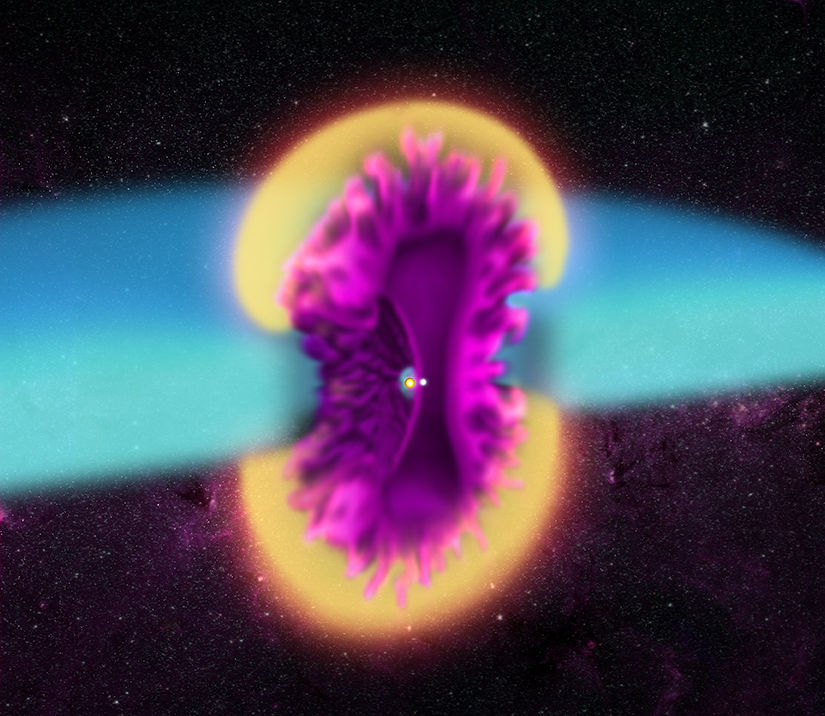 For several decades, scientists were aware of the irregular outbreaks of the Scorpio double star system V745, located about 25,000 light-years from Earth. Astronomers were surprised to see outbreaks on this star in 1937 and 1989. When this system again burst out on February 6, 2014, scientists were ready to observe this event with the help of several different telescopes, including the NASA Chandra space X-ray observatory (Chandra).

V745 Scorpio is a double system consisting of a red giant and a white dwarf. The components of this system are located so close to each other that the outer layers of the red giant are drawn off under the action of the gravity of the white dwarf, forming an accretion disk around it, and dropping onto its surface. Over time, the material accumulates on the surface of the white dwarf, which leads to a powerful thermonuclear explosion, called a new one.

Astronomers observed Scorpion’s V745 system with the help of Chandra for more than two weeks in 2014 and found an interesting fact that most of the material ejaculated in the explosion moves toward the Earth. To explain this fact in a new work, a team of researchers led by Salvatore Orlando built a three-dimensional computer model of the explosion (pictured). The geometry of the explosion in accordance with the results of this simulation was such that the ejected material forms two large fractions located above and below the plane of the acreage disk. The X-ray radiation from the material of the fraction directed away from the Earth is absorbed by the material of the fraction directed toward our planet, and therefore becomes indistinguishable from observations in the x-ray range, the authors explain.