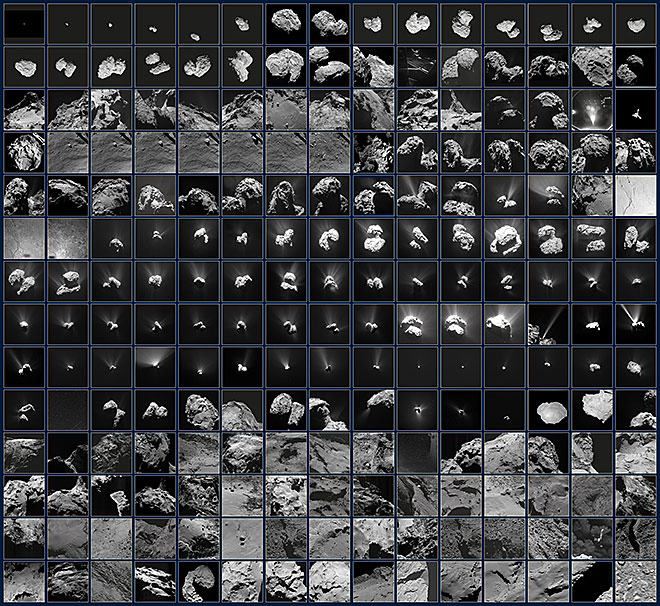 The presented 210 images reflect the constantly changing view of Rosetta on the comet 67P / Churyumova – Gerasimenko for the period from July 2014 to September 2016. The photo session begins a month before the arrival of the “Rosetta” on August 6, at that time in the field of view of the device the comet was just a point in a few pixels. When a curious figure suddenly appeared in the space, Rosetta hurried to show its surface, approaching 10 km to find a suitable place for the landing of the downhill module “Fila”, which took place only three months later.

The landing of the “Fila” is marked by “farewell” shots taken both by spacecraft shortly after the separation, and by the “Phil” himself, when he approached the surface at his first point. An image taken at the final landing site is also presented.

Subsequent images taken by Rosetta reflect the varying distance from the comet, as well as the growth and fall in the activity of the comet as it orbits the Sun.

Before the comet reached its most active phase in August 2015, Rosetta managed to make several close spans, including one in which the geometry of the illumination from the Sun was such that the shadow of the spacecraft was visible on the surface.

Then, due to increased dust in the local environment, Rosetta had to maintain a safer distance and conduct scientific observations from afar. But at this time, impressive views were received on the global activity of the comet, including jets and flares.

As soon as her activity began to weaken, Rosetta again approached and began to conduct scientific observations closer to the core, obtaining images of the surface at a higher resolution and tracing the changes after this period of activity.

Over time, when the comet returned to the colder external solar system, the available solar energy for the work of Rosetta fell. The mission ended with its dramatic descent to the surface of the comet on September 30, 2016. A selection of final shots is presented at the end of the collage.