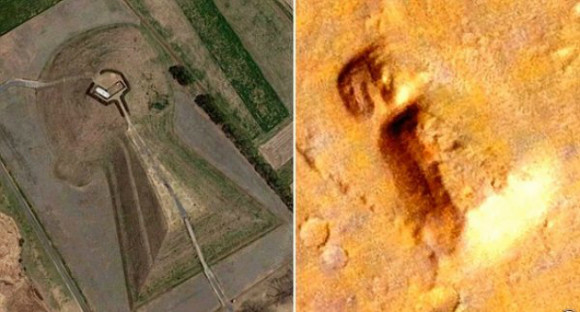 Ufologists claim that Mars discovered the tomb, inspired by the ancient Japanese burial. This sensation instantly raised another round of debate on the question: is there life on Mars? And was it?

In Youtube there is a video with evidence of the existence of the ancient Japanese civilization on the red planet. “Mound on Mars in the form of a keyhole is very similar to the tomb Kofun in Japan” — say the authors of the movie. “Its sides have straight edges, which then move in a circle. Just like in Japan.”

Seekers of extraterrestrial civilizations claim that this object is further evidence of the resettlement of the indigenous population of Mars to Earth. According to them, the humanoids left their homeland because of the disaster and began to grow roots on our planet, zastrow its own structures.

Of course, NASA has refuted all these arguments. They explained flat faces Mars hill displacement of the soil, which crumbled after billions of years.

Scientists say that our brain is designed so that any object, somewhat similar to the hill, we would like to “finish building” to individuals or Japanese tombs. This phenomenon is called “pareidolia”, or the visual illusion. That is why we can see something meaningful in a disorderly chaos.