Ultrafast expansion of the Universe indicates 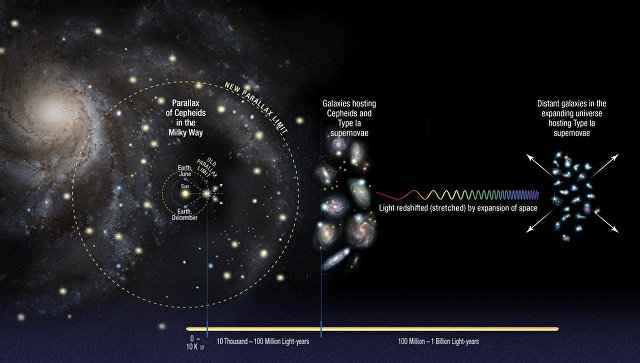 An independent panel of scientists confirmed that the universe really is expanding faster now than shown by the calculations, built on the observations of the Big Bang’s echo, is told in a series of five articles accepted for publication in the journal Monthly Notices of the Royal Astronomical Society.

“Differences in the current speed of expansion of the Universe and the fact that the observations for the Big Bang, is not only confirmed, but strengthened due to new data on how distant galaxies bend light. These discrepancies can be generated by “new physics” beyond the Standard model of cosmology, in particular, of some other form of dark energy,” said Frederic Kubrin (Frederic Coubrin) from the Federal Polytechnic school in Lausanne (Switzerland).

The dark birth of the Universe

In 1929, the famous astronomer Edwin Hubble proved that our universe is not static, but gradually expanding, observing the movement of distant galaxies. In the late 20th century astrophysicists have discovered, watching the supernovae of the first type that it is not expanding with a constant speed and with acceleration. The reason for this, as it is today according to scientists, dark energy – the mysterious substance acting on the matter as a kind of “antigravity”.

In June last year, Nobel laureate Adam Riess (Adam Reiss) and his colleagues, the discoverers of this phenomenon have calculated the exact speed of expansion of the Universe today, using variable stars-Cepheids in nearby galaxies, the distance to which you can calculate with extreme precision.

This refinement gave a very unexpected result – it turned out that two galaxies separated by a distance of about 3 million light-years away, moving at the speed of about 73 kilometers per second. This figure is significantly higher than the data obtained using orbital telescope WMAP and Planck – 69 kilometers per second, and cannot be explained with existing conceptions of the nature of dark energy and the mechanism of the birth of the Universe.

Riess and his colleagues suggested that there is a third “dark” substance “dark radiation” (dark radiation), forcing it to accelerate faster theoretical predictions in the first days of life of the Universe. Such a statement did not go unnoticed, and H0LiCOW collaboration that includes dozens of astronomers from all continents of the planet, began an investigation of this hypothesis, observing of quasars and active nuclei of distant galaxies.

Game space with candles and lenses

Quasars, due to the giant black hole at their center, in a special way distort the structure of space-time, enhancing the light passing through its surroundings, like a giant lens.

If the two quasar arranged one behind the other for observers on Earth, there is an interesting thing – the light of more distant quasar will split when passing through the gravitational lens of the first core of the galaxy. Because of this we will see not two, but five galaxies, four of which will be light “copies” of the more distant object. Most importantly, each copy will be a “photo” of the quasar at different periods of his life due to the fact that the light spent different amounts of time to the output of a gravitational lens.

The duration of this time, as the scientists explain, depends on the speed of expansion of the Universe that allows us to calculate it, observing large numbers of distant quasars. Been doing parties H0LiCOW, looking for such “double” quasars and how they are “copies”.

In total, Kubrin and colleagues found three such quasar “doll” and studied them using orbital telescope “Hubble”, “Spitzer” and a number of ground-based telescopes in Hawaii and Chile. These measurements, according to the researchers, allowed them to measure the Hubble constant “average” cosmological distance with the level of error is 3.8%, which is significantly better than previously obtained results.

These calculations showed that the universe is expanding at a rate of about 71.9 kilometers per second, which generally corresponds to the result that Riess and his colleagues have received close to cosmological distances, and speaks in favor of the existence of some third “dark” substance that accelerates the Universe in its youth. Another possible explanation of the discrepancies with the data – the universe really is flat, and resembles the sphere or “harmonica”. It’s also possible that the quantity or properties of dark matter has changed over the last 13 billion years, so the universe began to grow faster.

In any case, the scientists plan to study approximately one hundred of these quasars in order to ensure the reliability of the data received, and understand, how can one explain such an unusual behavior of the Universe beyond the standard cosmological theory.