Under ice “heart” of Pluto, most likely, huge ocean 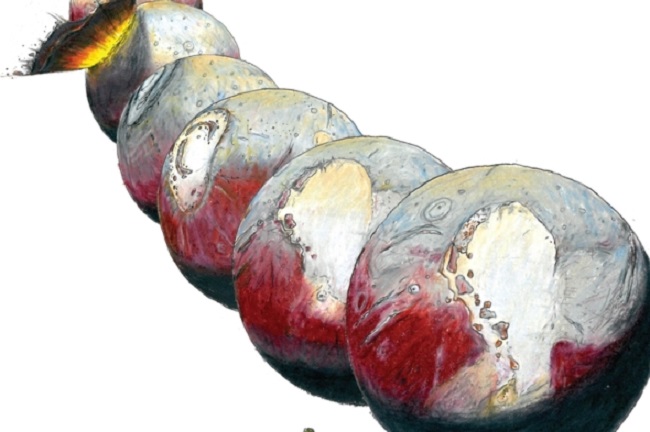 The other day astronomers produced the evidence of existence of the ocean best at the moment in the unexpected place — on the dwarf planet Pluto, in dark remote places of the Solar system. Where nitrogen and other flying gases freeze, and water turns in firm as a stone ice. Decades scientists thought of whether this ice can act as “heater” and keep a remaining balance of heat and moisture deeply in Pluto and other objects, is so far from the Sun. However they didn’t have all this time of data which could confirm these surprising assumptions.

Everything changed when last year by Pluto the mission of NASA “New horizons” flew by. Among many miracles of the dwarf planet, the plain in the form of heart 1600 kilometers wide which stretched on all surface of the far world was the brightest and amazing feature which was seen by the probe. Heart was called “Tombaugh’s region” in honor of the pioneer of Pluto, the American astronomer Clyde Tombaugh. Cracks and breaks in Tombaugh’s region and other parts of the planet assumed that the near-surface layer of watery porridge slowly freezes through, breaking a surface in case of expansion. However, these cracks could explain also other, drier surfaces. On Wednesday in Nature there were two researches which strengthened belief of scientists that ice heart of Pluto hides warm and damp inner world.

“If we are right, oceans are quite widespread in an outer Solar System, and other objects of the similar size to Pluto can have subsurface oceans too”, Francis Nimmo, the leading author of one of a research, the planetologist of the University of California to Santa Cruz says.

New certificates for benefit of the ocean on Pluto came from the western share of the region 1000 kilometers wide of Tombo which Sputnik Planitia informally refer to as. “Companion Planition” quite strange if to compare to other part of the firm, covered with craters, old surface of Pluto as it is covered with bright, rather fresh ice also has no craters. Scientists explained a young type of Sputnik Planitia with the fact that it is the ancient shock pool — the huge crater filled with thick ice floes of young ice which under the influence of heat filtering from below melts and refreshes a surface. The most curious in Sputnik Planitia are its arrangement: along the equator in curious equalization concerning the largest moon of Pluto Charon. Charon is prilivno blocked with Pluto, its orbit is synchronized with rotation of Pluto therefore it as if hanged in an immovability over the region, opposite Sputnik Planitia.

“If to draw a line from Charon’s center through the center of Pluto to distant side of the planet, she will leave very close to Sputnik Planitia”, James Tatl Kean, the doctoral candidate of the Arizonian university in Tucson and the leading author of other research in Nature says. The probability that the huge blow will make a crater yes sir leveled with Charon is quite small, Kean therefore he has decided to look for other explanation says. His team used data of “The new horizons” and land telescopes for creation of models of how formation of Sputnik Planitia could affect a subsoil and orbital evolution of Pluto.

Both teams have found out that strange alignment with Charon is the simplest to explain that Sputnik Planitia much more massivny surrounding regions on Pluto. For millions of years this “anomaly of positive weight” has led to the fact that all planet has bent and has got into the real situation. Modeling process, Kean’s team has found out that if Sputnik Planitia was created to the northwest from the present provision, consequences of his reorientation through the equator would lead to emergence of cracks, canyons and mountains which practically correspond observed by “The new horizons”.

Nimmo’s team considers that the subsurface ocean — the most probable cause of the fact that Sputnik Planitia is heavier than the environment. The birth of this region during huge collision had to lift a lot of ice from the surface of Pluto that watery slush has risen and condensed, having formed such bruise on the surface of the planet. Nimmo’s models say that the ocean of Pluto of 100 kilometers in depth and to him billions of years, in him are a lot of liquid ammonia, natural antifreeze which is present at many ice bodies of an outer Solar System. Though the ocean of Pluto could in the principle support life, he is locked under 200-kilometer thickness of ice and is very far from Earth therefore to investigate him it will hardly turn out — simpler to look for life in other subsurface oceans of Solar system.