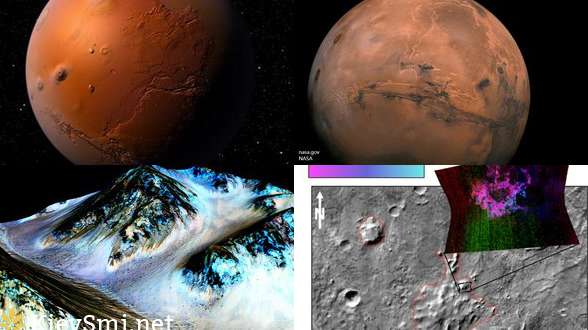 The last data sent to Earth orbiting around Mars research probe Mars Reconnaissance Orbiter, to confirm the theory about volcanic activity, which once in ancient times took place at the South pole of the red planet. Billions of years ago Mars was not as lifeless as it is now, and active volcanic processes proceeded even in the permafrost of the South pole, as evidenced by features of the ice cover of the planet.

The staff of the American Purdue University analyzed the array data obtained using the mineral-mapping spectrometer, which is equipped with a Mars probe, and found the chemical composition of the surface of the southern polar regions of Mars. In particular, researchers were interested in the area, known as the Sisyphi Montes, which is rich with flat tops resembling terrestrial subglacial volcanoes.

“The stones are able to tell the whole amazing story. Analysis of the rocks can tell a lot about the history of the volcano that spawned them. Martian rocks, no doubt, have something to tell you,” said lead study scientist, Sheridan Ackiss.

The chemical composition of rocks, which saturated the South pole of Mars very similar to earth’s volcanic rocks, formed in volcanic eruptions under ice. In particular, this is indicated by the high content of zeolites, sulfates and clay.