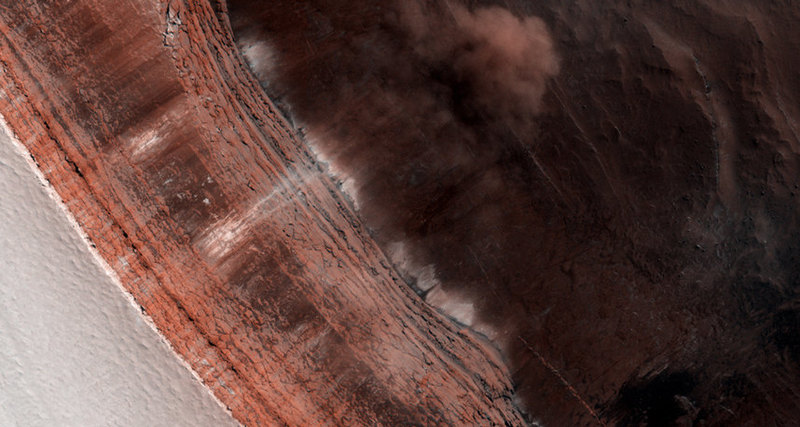 Recently discovered deposits of water ice on steep cliffs of the Martian mountains led scientists to assume that there are ice deposits on Mars hidden under a thin 1-2 meter layer of regolith.

The fact that the ice is not deep, may be good news for future Martian mission participants, says the planetologist Colin Dundas. Ice hidden by a meter or two of sand and stones can be used as a source of drinking water or extract oxygen from it – for breathing or for fueling the fuel tanks of an interplanetary ship.

Ice on steep slopes Dandas and his colleagues found on the images of the orbiter Mars Reconnaissance Orbiter (MRO). Unlike the ice fields discovered in 2008 by the descent vehicle Phoenix Mars, the ice hidden under the Martian soil lies close to the equator (mean latitude is about 55 °), and not near the poles.

The photographs show that the ice lies in thin layers. Dundas suggests that these deposits were formed as a result of heavy snowfall millions of years ago. And large boulders sticking out of the ice, allow us to conclude that every year the glaciers become a few millimeters thinner due to erosion.

To get ice directly on the places seen by the MRO camera is not a good idea; The deposits are located in difficult-to-reach places in high mountains. However, Dandas believes that there may be other exits, in less rough terrain.