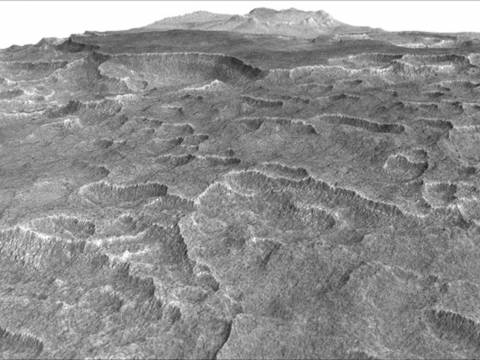 A group of American and canadian geophysicists found on Mars, a huge cluster of underground ice, which contains about as much water as lake superior which is the largest and deepest of the Great lakes.

To find giant deposits of underground ice, scientists were able with the help of the SHARAD orbital radar station MRO (Mars Reconnaissance Orbiter).

In a study published in Geophysical Research Letters, geophysicists note that the layer consisting of water ice (50-80%), sand and gases, is at a depth of 1-10 meters below the surface in the West of the plain of Utopia, about halfway from the equator to the North pole. Frozen pond has a thickness of 80-170 meters and a volume of 14.3 cubic kilometers.

“Discovered accumulation of ground ice exceeds in size the area of the state of new Mexico,” reported NASA.

“This field probably was formed due to the heavy snowfall that formed the ice sheet, mixed with the dust at the time of formation of Mars, when the planet’s axis was tilted differently than it is now,” says the study’s lead author Cassie Navigator.