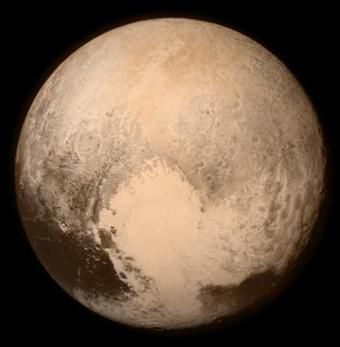 After the historic flight of the NASA probe “New horizons” to Pluto last year, the scientists began to receive new data, indicating that under the icy surface of the dwarf planet may be the ocean of liquid water. Today with the help of simulation of dynamics of cosmic collision that formed the large crater on the surface of Pluto, a team of researchers produced a new assessment of possible subsurface ocean of Pluto.

In this study, conducted by a team of scientists led by geologist from brown University, USA, Brandon Johnson, established with high probability that under the surface of Pluto is an ocean of liquid water depth of 100 kilometers. In addition, the study assessed the composition of the substance of that ocean, which was similar to the composition of the Dead sea, located on the surface of our planet.

The method used in this study based on the analysis of the gravitational anomaly caused by a hypothetical subsurface ocean. It is known that liquid water has a higher density than water ice, so the equality of the volumes she has a large mass and, therefore, intensively involved in gravitational interactions. Planetary scientists have long paid attention to the fact that under the surface of Pluto in the region of the plains of the Satellite, located in the Western part of the famous plot of the surface of the dwarf planet in the shape of a heart, there is accumulation of excess weight manifesting itself in the gravitational interaction with the satellite of Pluto is Charon, which is Pluto is tidal capture, that is addressed to him is always the same side. On the other hand, it is known that the plains of the Satellite represent a giant impact crater, so in the absence of additional source of excess weight, rather, must demonstrate its deficiency, caused by emission of substances from the surface as a result of collision. As observation reveals, on the contrary, a positive gravity anomaly, or an excess of mass in the region of the surface beneath the plains of the Satellite, in this case, the authors of the work implemented at least a typical diagram of a collision in which the mass deficit can be compensated by raising to the surface the heavier layers from the depths of the dwarf planet, such as, for example, layers of liquid water.

In their study, Brandon and his colleagues analyzed with the help of numerical methods the dynamics of a cosmic collision that formed the plains of the Satellite given the mentioned above methodological regulations and received an approximate layer thickness of subsurface ocean that can cause a positive gravity anomaly that is equivalent to the anomaly observed for the plains of the Satellite, which was equal to about 100 kilometers, and the approximate salt content in the water of the ocean, which was about 30 percent.