Unexpected clouds are found on Jupiter 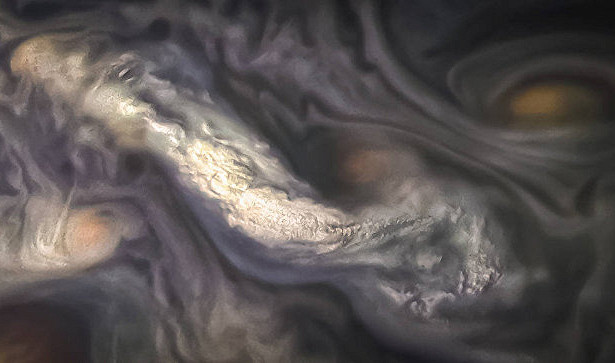 NASA published a photo of unusual “high-altitude” clouds in the northern temperate zone of Jupiter.

The frame was taken with the aid of the spacecraft Juno, which was 6200 kilometers from the upper layers of the clouds.

It is noted that for a long time scientists have tried to understand how deep the vortexes that make up the belt and form such a complex pattern. The data obtained with the help of Juno, showed that the cloud structures go into the atmosphere to a depth of about three thousand kilometers.

Juno was launched on August 5, 2011 to explore Jupiter and entered its orbit in July 2016. The missions of the mission include studying the gravitational and magnetic fields of the planet, as well as testing the hypothesis that Jupiter has a solid core.