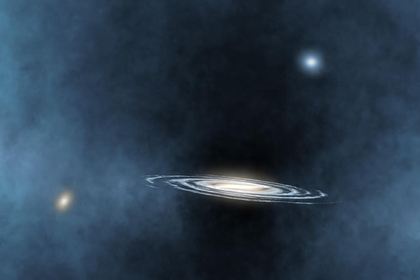 The influence of supermassive black holes in galactic cores extends far beyond the parent galaxies and can even affect neighboring galaxies. An unexpected effect from giant objects was discovered by astrophysicists of the Max-Planck Institute of Astronomy, as well as their colleagues from Mexico and the United States, whose article was published in the journal Nature.

The processes in dwarf satellite galaxies depend on the environment surrounding the central galaxy. It is believed that this environment, in turn, is influenced by the supermassive black hole, despite the distance of tens of thousands of light years between them. However, the nature of this connection remained poorly understood by astronomers due to scanty observational data.

In the new scientific work, scientists used the Sloan Digital Sky Survey catalog and identified 124,163 satellite galaxies, determining their position relative to the major and minor axes of the central galaxy (most of the central galaxies in the study were elliptical). It turned out that extinct dwarf galaxies, in which there is no star formation, are relatively rare along the minor axes, which seems illogical, given that supermassive black holes in the central core eject mass and energy mainly in the direction of the minor axis of the galaxy (this should “blow off” matter suitable for star formation) due to the relatively low resistance of the interstellar medium.

According to scientists, this may be due to several reasons. Galaxies could initially have formed under other conditions unrelated to the current state of the galactic environment. However, it is also possible that the interaction between the satellite galaxy and the halo of the central galaxy played a role.

To test both scenarios, the scientists used the IllustrisTNG virtual universe model, which differs from previous models in improved simulations of active galactic nuclei (which contain a feeding supermassive black hole). It turned out that the anomaly in the distribution of satellite galaxies arises precisely because of the influence of the nucleus, which operates far beyond the central galaxy.

Energy ejections from a black hole create low-density regions in the near-galactic environment, which reduces the efficiency of the processes responsible for the “extinguishing” of dwarf galaxies. These include, for example, “ram pressure stripping”. However, the authors of the article emphasize that they cannot exclude another scenario, according to which the outflowing matter from the galactic nucleus enhances star formation to a greater extent, and does not simply stop its extinction.