Unique images of the northern lights on Saturn 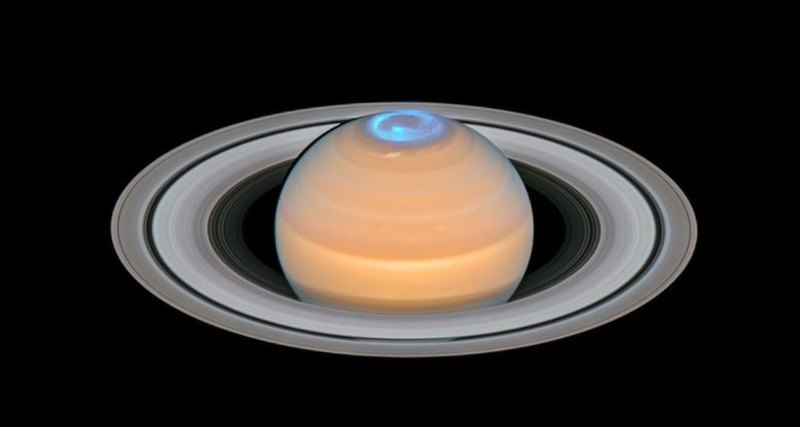 Back in 2017, the Hubble telescope was able to capture a stunning picture of the northern lights at the poles of Saturn. Recently, astronomers had a unique chance to improve their understanding of this grandiose phenomenon. The new session of the “Hubble” coincided with the final span of the Cassini apparatus, and therefore they worked in tandem.

Despite the fact that in the picture and video the light is blue, in fact the Aurora shines in the ultraviolet spectrum – blue is chosen for convenience. The image itself is based on early observations (the ones that were made in 2017) and new data of this year. The very same light appears when the gaseous hydrogen on the poles comes into contact with the powerful magnetic field of the planet. It is incredibly intense, moreover, the character of the radiance is constantly changing due to magnetospheric distortions and the fact that Saturn rotates relatively quickly. By the way, the day on Saturn lasts only 11 earth hours.

On May 24, according to the earthly calendar, Saturn reached the point of summer solstice, when the north pole turned to the Sun – just like it does on Earth. The scientists used the Hubble telescope, and Cassini flew close enough to get another batch of data. Aggregate observations showed that the activity of auroras reached its peak at dawn. This was already known to astronomers, but what became a real surprise was the unexpected peak of radiance activity shortly before midnight. This surge, according to experts, “strikingly resembled the northern lights of the Earth.” About their observations, they tell in an article published in Geophysical Research Letters. Probably, this phenomenon was provoked by the solar wind.