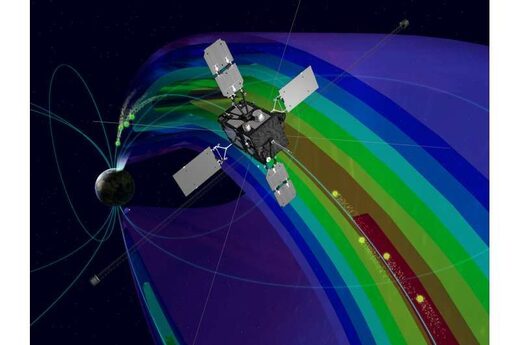 The most important component of auroras is much higher in space than previously thought, according to a new study published in Scientific Reports.

The blinding light in the polar night sky requires an electric accelerator to propel charged particles down through the atmosphere.

Scientists from the University of Nagoya and their colleagues from Japan, Taiwan and the United States have discovered that it exists beyond 30,000 kilometers above the Earth’s surface, which provides insight not only about the Earth, but also about other planets.

The history of the formation of the aurora begins with a supersonic plasma that the Sun launches into space in the form of high-speed charged particles. As these charged particles approach the Earth, they deflect and flow along the lines of force of the planet’s magnetic field, eventually rushing towards the poles.

“Most of the electrons in the magnetosphere do not reach the part of the upper atmosphere called the ionosphere because they are repelled by the earth’s magnetic field,” explains Shun Imajo of the Institute for Earth and Space Research at Nagoya University.

But some particles receive a burst of energy that carries them into the upper atmosphere of the Earth, where they collide and excite oxygen and nitrogen atoms at an altitude of about 100 kilometers. When these atoms come out of their state of excitement, they radiate a radiance. However, many details of this process remain a mystery.

“Our research shows that the electric field that accelerates auroral particles can exist at any height along the magnetic field line and is not limited to the transition region between the ionosphere and magnetosphere at a distance of several thousand kilometers,” says Imaggio.

“This suggests that unknown magnetospheric mechanisms are coming into play.”