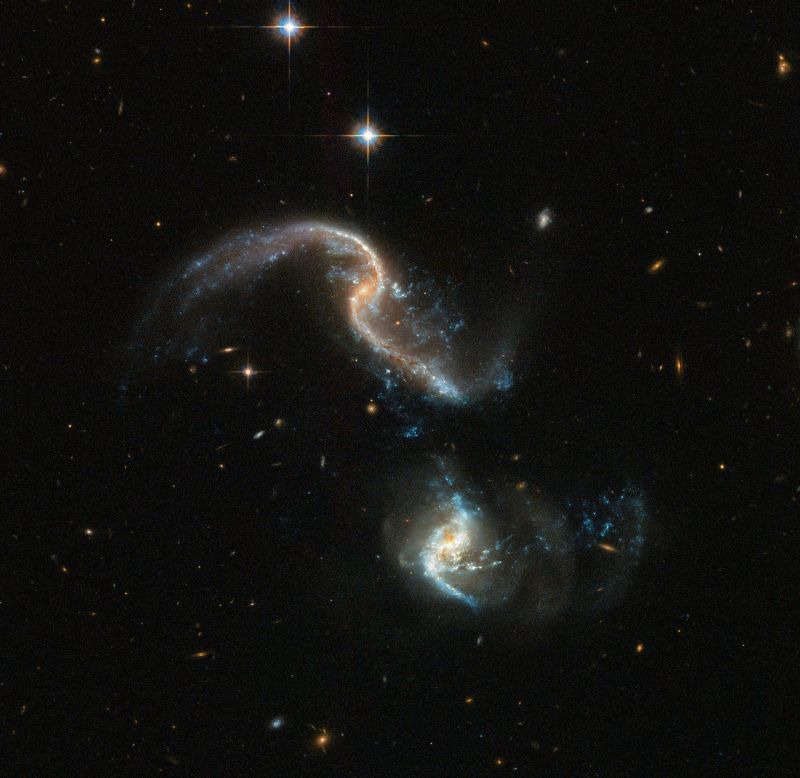 Galaxies are not static islands – they are dynamic and constantly changing objects moving in the dark emptiness of the universe. Sometimes, as can be seen from this snapshot of the Arp 256 system, made with the help of the Hubble Space Telescope (“Hubble”), galaxies can experience powerful collisions.

At a distance of 350 million light-years away from us, a pair of spiral galaxies with a jumper started to merge into a single galaxy in the direction of the constellation of China. This photo shows one separate moment of the confluence, and gas, dust and stars that are ejected from galaxies under the influence of gravitational forces are visible, thanks to which the fusion takes place.

Although the nuclei of galaxies are still separated by a rather large distance, the shapes of the Arp 256 galaxies are already significantly distorted. The galaxy, located at the top of the picture, shows pronounced tidal tails – long, long bands of gas, dust and stars.

The Arp 256 source was first recorded by Halton Arp in 1966 as one of the objects of his “Atlas of peculiar”. of galaxies. ” The purpose of this catalog was to classify examples of unusual and surprising structures among nearby galaxies that reflect the various stages in the evolution of galaxies. These peculiar galaxies reflect the transient processes occurring during the transformation of spiral and elliptical galaxies.

This picture was taken with the help of the Advanced Camera for Surveys (ACS) cameras and the Wide Field Camera 3 (WFC3) of the Hubble Space Telescope (Hubble). The image is a new version of a previously published 2008 snapshot, which was part of a collection of 59 images of merging galaxies, published by the 18th anniversary of the Hubble.