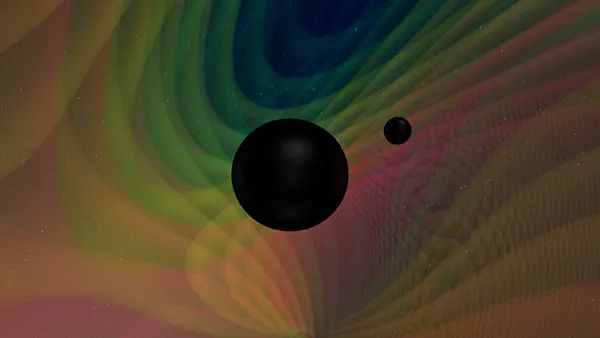 Astrophysicists for the first time managed to fix gravitational waves from the merger of a double black hole with unequal masses. The monitoring protocol is published on the LIGO project website.

Currently, the registration of gravitational waves in itself is no longer unusual. But in this case, their source was an event that astronomers had never seen.

If earlier the waves always emanated from two approximately equal mass black holes, 20-40 times the mass of the Sun, then signal GW 190412 was received from a nonequilibrium binary system of black holes, one of which was 29.7 solar masses, and the other was three times less – only 8.4. By the way, this is the smallest of the black holes discovered so far.

“None of these masses is in itself too surprising. We know that black holes are of such sizes. The mass ratio is new,” one of the authors of the discovery, astronomer Christopher Berry from Northwestern University, explains on his blog. in the United States. “This observation allows us to test our predictions for gravitational wave signals and is another piece of the puzzle about how double black holes form.”

Interestingly, the fusion of such a system with two distinctly different black holes gave a longer gravitational signal than any other black hole fusion. This was due to the fact that the event GW 190412 produced two different frequencies of waves propagating simultaneously, which is not observed when black holes merge with approximately the same mass.

The presence of different-frequency waves allowed the authors to conduct another test of the general theory of relativity. They divided the signal of the gravitational wave into earlier and later parts and used the equations to calculate the second part of the signal of each half. The calculations completely coincided with the observations, which serves as one of the most significant evidence to date of Einstein’s general theory of relativity.

The large difference in the masses of black holes in the binary system enabled scientists to more accurately measure some of the astrophysical properties of the system.

“This large difference in mass means that we can more accurately measure several properties of the system: its distance to us, the angle at which we look at it, and the speed of rotation of a heavy black hole around its axis,” the Institute’s press release says Gravitational Physics of the Max Planck Society in Hanover, Germany, words of an employee of the institute who participated in the study, Roberto Cotesta.

The rapid rotation of a larger black hole suggests that it could merge with other black holes earlier, before the event GW 190412. It is possible that scientists are now observing the remainder of this triple or quadruple stellar system.