Unusual green glow seen in the atmosphere of Mars 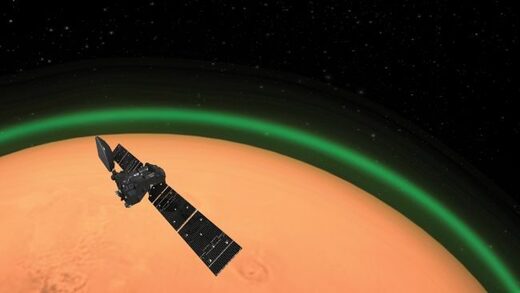 The orbiter of the European Space Agency Trace Gas Orbiter (TGO) discovered an emerald green glow in the thin atmosphere of Mars, this phenomenon was first seen on another planet.

“One of the brightest radiations observed on Earth is associated with nocturnal glow. More specifically, from oxygen atoms that emit a specific wavelength of light that has never been seen around another planet,” said a statement by the lead author of the study, Jean-Claude Gerard from Liege University in Belgium.

As Gerard noted, green radiation is characteristic of oxygen. Observers of the sky at high latitudes here on Earth can see this color in multi-colored auroras, known as auroras, which are generated by charged particles from the sun, crashing into molecules high in the atmosphere.

But the night glow is another. It is caused by the interaction of sunlight with atoms and molecules in the air, which generates subtle but continuous light. This radiation is difficult to see even here on Earth, so some of the best images of the green night glow of our planet appear thanks to astronauts aboard the International Space Station (ISS).

“The night glow comes from the recombination of split molecules, while the day glow comes from when sunlight directly excites atoms and molecules, such as nitrogen and oxygen,” scientists at the European Space Agency (ESA) write.

“Predicting changes in atmospheric density is especially important for upcoming missions, including the ExoMars 2022 mission, which will send the rover and the surface scientific platform to study the surface of the Red Planet,” said Sweden, who co-authored a new study.