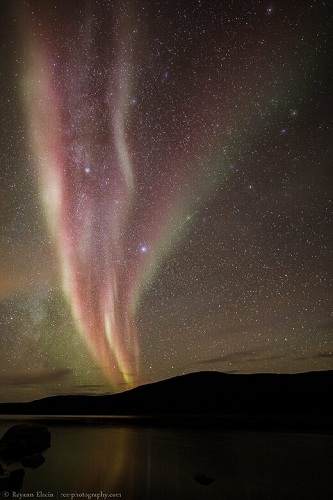 Photographer Ryan Elsein constantly sees the aurora over Utsjoki, Finland. But the auroras he saw last night were different. “They were red,” he says.

“I’ve rarely seen something like this before,” says Elsein. “I double checked the white balance on my camera to make sure everything was in order. But it was the same color temperature as all my other aurora images. ”

“Later we saw the usual green curls and even a little pink nitrogen fringe,” he says. “When the green curls subsided, the red ones returned.”

Usually, auroras are green – the green glow of oxygen atoms at an altitude of about 150 km above the Earth’s surface. The rare red auroras are also caused by oxygen atoms, but at high altitudes of 150 to 500 km.

At these altitudes, the temperature and density of the atmosphere favor atomic transitions that emit red photons. Indeed, Elsein’s photographs depict red on top of green, as theory predicts.

For some reason unknown to us, the solar wind on October 12 excited oxygen at higher altitudes than usual, making it possible for the rare red auroras to shine.

A couple of days ago, on October 11, in the complete absence of solar activity or solar flare, a coronal mass ejection, a crack opened in the Earth’s magnetic field, through which a slowly moving solar wind poured, causing an “amazing flash” of auroras over Norway.