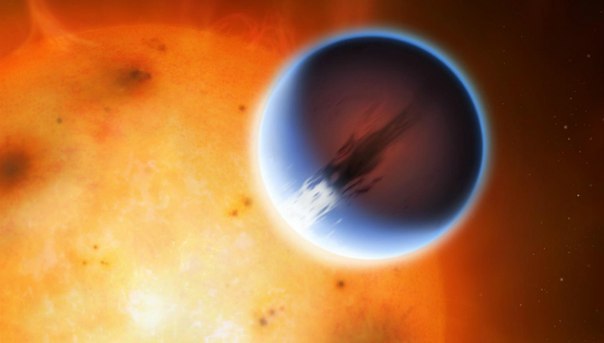 Scientists from the University of Warwick has created the first weather map of a planet beyond the Solar system (previously, this was done only for “failed stars”).

According to ground-based observations of the planet HD 189733 b air mass moves 20 times faster than the strongest winds of the Earth. Their speed is 7 times the speed of sound!

HD 189733 b is an exoplanet orbiting the star HD 189733. The Orb is located at a distance of about 63 light-years from Earth in the constellation Chanterelles.

This world is 13% more massive than Jupiter and revolves around its parent star for 2.2 earth days, making it a so-called hot Jupiter with a surface temperature of about 1200 degrees Celsius.

As extrasolar planet is not far from us, it is of particular interest to astronomers. They found out that it is painted in a deep blue color (probably due to particles of silicates), also in its atmosphere there is carbon dioxide.

Astrophysics from the University of Warwick for the first time measured and built a weather map of an alien world, using the HARPS spectrograph of the 3.6-meter telescope at the Observatory of La Silla in Chile. Using the data the scientists calculated that the speed of winds blowing over the surface of HD 189733 b is about 8,700 miles per hour.

To estimate the speed of winds in the atmosphere of extrasolar planets, scientists used the Doppler effect: as the distance of HD 189733 b from the Earth during its motion in its own orbit, changing the characteristics of light coming from it.

“The surface of the star at the center brighter than the edges. When a planet passes over the face of the star, changing the amount of light the stars that are blocked by different parts of the atmosphere of exoplanets, ” says one of the study’s authors Tom Louden (Tom Louden). For the first time we have used this information to measure the speed of winds on opposite sides of the planet and map the velocity of the winds.”

The researchers believe that the method used to calculate the speed of the winds on HD 189733 b can be used to study weather on other, more Earth-like exoplanets.