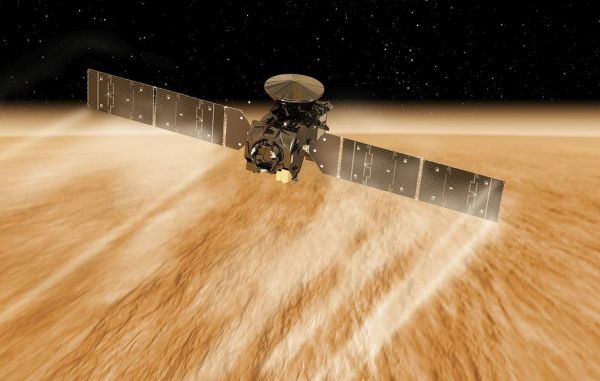 The instruments of the ExoMars-TGO probe have recorded traces of hydrochloric acid in the atmosphere of Mars for the first time. Presumably, it appeared due to the interaction of particles of salt, water and sunlight in the upper layers of the planet’s atmosphere. Alexander Trokhimovsky, chief specialist of the Planetary Physics Department of the Space Research Institute of the Russian Academy of Sciences, spoke about this.

“The search for hydrochloric acid was one of the main tasks of the mission. Its vapors are present in the earth’s atmosphere, where they get as a result of volcanic eruptions. In the soil of Mars, as we already know from the results of the work of the rovers, there are a large number of perchlorates, but presumably associated traces chlorine and hydrochloric acid in the atmosphere of Mars have never been found before, “- said the scientist during a speech at the XI Moscow International Symposium on the Research of the Solar System.

The ExoMars-TGO mission has been studying the atmosphere of Mars for three years, measuring the concentrations of various gases. One of its main tasks is to estimate the concentration of methane in the Martian atmosphere and find possible sources of this gas.

During the first year of operation, the ExoMars-TGO instruments did not record any traces of methane in the atmosphere of Mars. At the same time, at the same time, the sensors of the Curiosity rover recorded a methane release in Gale Crater.

Trokhimovsky and his colleagues, who worked with the Russian spectrometer ACS, for the first time discovered hydrochloric acid vapor in the atmosphere of Mars. Planetary scientists believe that their source can be both the vast reserves of perchlorates, chlorine compounds, oxygen and other elements present in the soil of Mars, and various geological processes in its depths.

“Calculations of theorists showed that there should be very little hydrochloric acid vapor in the atmosphere of Mars, its concentration should not exceed 0.3 parts per billion. Therefore, initially we were not surprised that our instrument did not record any noticeable traces of the presence of HCl in the Martian air. “, – the scientist continued.

The chlorine cycle on Mars

When planetary scientists studied the spectral data of the ACS in search of all possible variations in the absorption and emission lines that were associated with hydrochloric acid, they found unambiguous traces of the presence of HCl in the Martian air. Subsequently, this fact was confirmed by the data from the NOMAD device, which is installed on board the ExoMars-TGO.

Subsequent observations showed that hydrochloric acid quickly appeared and disappeared from the atmosphere of Mars. Astronomers do not yet understand why this is happening. Based on similar fluctuations in the concentration of water vapor and hydrochloric acid in the upper atmosphere of Mars, Trokhimovsky and his colleagues suggest that it is a source of fine dust particles covered with large amounts of table salt or other chlorine compounds.

During dust storms, they can rise to great heights, where these salt particles begin to interact with water and ultraviolet radiation from the Sun. As a result, atomic chlorine is formed, which reacts with various hydrogen compounds and forms hydrochloric acid molecules.

Subsequently, these molecules are either disintegrated by solar ultraviolet light, or react with dust particles. As a result, new molecules of sodium chloride and perchlorates are formed, which eventually end up in the upper layers of the Martian soil.

Trokhimovsky and his colleagues do not exclude that chlorine compounds are traces of some geological processes on Mars. However, the likelihood of this is vanishingly small. In particular, scientists did not record traces of other volcanic gases, such as sulfur dioxide, and also did not detect surges in the concentration of hydrochloric acid during the Marsquakes, which are recorded by the American landing platform InSight.

Scientists hope that further measurements will help to understand why hydrochloric acid vapors very quickly disappear from the Martian atmosphere and why its concentration varies greatly in different regions of the planet. Thanks to this, it will be possible to find out what role chlorine plays in the chemical evolution of Mars.