Variable stars in the constellation of the Pleiades 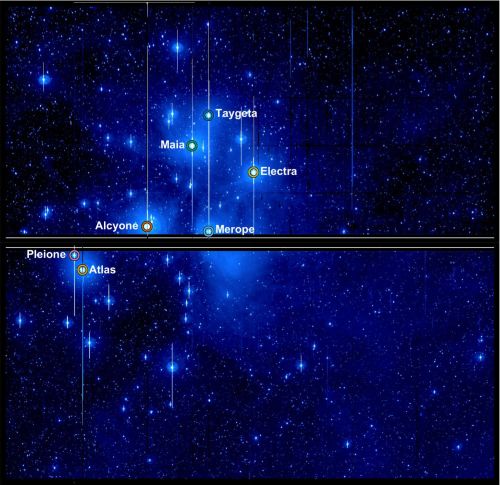 In a new study, Dr. Tim White of the Astrophysics Center of the University of Aarhus, Denmark, together with colleagues, developed a powerful new method for observing stars, such as the constellation stars of the Pleiades, which are usually too bright to be observed with high-performance telescopes.

Using an innovative algorithm to improve the quality of observational data conducted with the NASA Kepler Space Telescope (Kepler), the team conducted the most detailed study to date of the variability of such stars.

Since NASA’s Kepler space telescope is designed to search for exoplanets in orbits around distant stars, it is able to observe several thousand dim stars simultaneously, but some of the brightest stars experience difficulties. A stream of light coming from a bright star leads to saturation of the central pixels of the image, and some of the light flux is lost for measurement purposes. In his study, White and his colleagues developed a method that allows you not to include saturated pixels in the analysis, and instead analyze neighboring pixels that are not saturated.

Using the developed algorithm to analyze the observational data of the Pleiades cluster collected with the help of the Kepler observatory, White and his team were able to find out that except for one of the seven bright cluster stars, they refer to slowly pulsing stars of spectral class B, whose pulsation period is approximately one day. However, the seventh Mayan star pulsates with a period of 10 days. After studying the literature data on this star and conducting additional spectroscopic observations using the telescope Hertzsprung SONG Telescope, the researchers found that the observed pulsations are associated with an extensive spot on the surface of the star, within which the substance contains anomalously high concentrations of manganese.