Video of the passage of “Cassini” through the atmosphere of Saturn 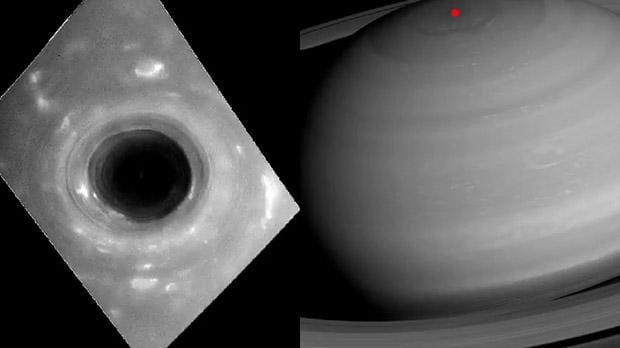 The Cassini team unveiled the first detailed video of the space probe’s passage through the upper atmosphere of Saturn during the first “dive” in the gap between the rings and the planet, NASA reports.

“These pictures are great, but we did not take full advantage of the camera with conservative settings, we will conduct similar observations on June 28 and, I believe, get even more beautiful and interesting from a scientific point of view,” said Andrew Ingersoll ) From the California Institute of Technology in Pasadena (USA).

Recently, “Cassini” officially began the final phase of his life, the last time he met with Titan. The rapprochement with this satellite helped the probe to change the trajectory and reach a course of collision with the giant planet, in the atmosphere of which it will burn in mid-September. Prior to this, 22 spans are ahead through the gap between the rings and their “master.”

Last week, “Cassini” made the first such pirouette, getting as close to Saturn and receiving a lot of new scientific data on the structure of the bowels and atmosphere of the giant planet. For additional protection, NASA deployed the main antenna of the probe so that it became a kind of shield protecting the spacecraft from dust and micro-asteroids.

During this span, the probe chamber, as Ingersoll says, worked virtually continuously and received images of clouds and the upper atmosphere of Saturn for an hour. NASA specialists chose the most successful photos and compiled them into a short video.

The main star of this short film was the famous hexagonal hurricane at the north pole of Saturn, the images of which “Cassini” has not yet received with such high accuracy. As planetologists note, these photos have already changed their ideas about how a giant storm behaves.

“I was surprised that the walls of the hexagon and the central funnel of the hurricane on the pole have such clear boundaries, something that we do not know yet keeps layers at different latitudes from mixing, so that the boundaries between them remain clear,” adds Kunio Sayanagi ( Kunio Sayanagi) from the University of Hampton (USA).

Such discoveries became possible due to the fact that at the time of the preparation of the video clip the probe was at a distance of only 6700 kilometers from the surface of the clouds of Saturn, so that he could see even the smallest structures in the atmosphere – the size was only 800 meters.

Next time, “Cassini” will fly through the hole between the rings and the planet at 9.00 Moscow time on May 9. He will try to look into the depths of Saturn and find gravitational anomalies, “enlighten” the planet’s rings with radio waves, and also receive Titan’s photographs from a long distance and measure the temperature of its clouds.