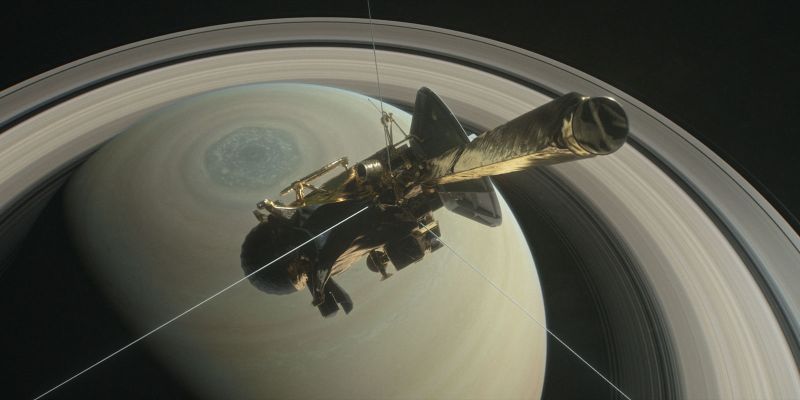 The station “Cassini” since 2004 has done a great job, but now the end of her life is coming to an end. Cassini is running out of fuel, so NASA scientists need to decide what funeral to arrange for it, and yesterday they shared an operation plan called the “Solemn Final” and even published a video with a simulation of the planned catastrophe.

“Cassini” will make several maneuvers, entering the orbit between Saturn and its rings, and then dive right into the atmosphere of the planet, where he dies.

It seems that this is not a very suitable end for such an important ship, but scientists want to avoid the accidental collision of “Cassini” with one of Saturn’s satellites. Some of these satellites, like Enceladus with its underground oceans or Titan with methane lakes and rivers, could potentially be home to primitive extraterrestrial life, and we can not afford to infect it with microbes from the Cassini.

Instead, during the “Solemn Finale” the station will safely burn in the atmosphere of Saturn, but first make 22 flights in the narrow space between Saturn and its rings, which no one has ever done before. In the process, Cassini will collect an incredible amount of information that, perhaps, will turn our notion of Saturn over.

Such a mission is very risky, which is why NASA was waiting until the last before proceeding to it. Material from the rings of Saturn constantly falls to the surface of the planet, and at such speeds, with which the “Cassini” travels, even a particle the size of a grain of sand can seriously damage the station, destroy instruments or completely destroy the ship.

NASA hopes that this will not happen, and current knowledge about Saturn and its rings gives a forecast that “Cassini” will survive, but even if the device is lost, its fragments will still fall on Saturn, as intended.

During the last mission, Cassini will be able to photograph individual stones that make up the rings of Saturn, to study the atmosphere of the planet and its magnetic fields, to find out how deep the storms are raging in its atmosphere. The last maneuver of the station will be on September 15, 2017.