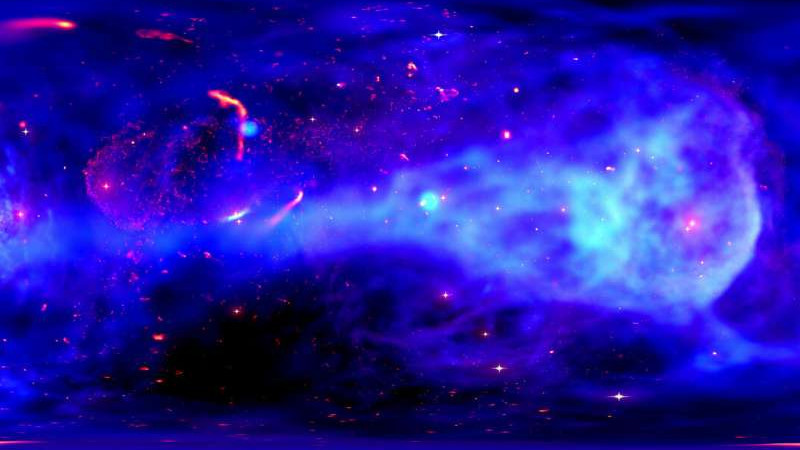 Want to go on a trip to the center of the Milky Way? See the new immersive ultra-high definition visualization.

This 360-degree video offers an unprecedented opportunity to view the center of the galaxy from the point of view of a central supermassive black hole in any chosen direction.

Combining the NASA Ames supercomputer simulations with the Chandra X-ray Observatory data, this visualization provides a new look at what is happening in and around the center of the Milky Way. It shows the influence of dozens of massive stellar giants with strong winds in the region a few light-years from the supermassive black hole Sagittarius A *.

These winds provide a supply of material for feeding a supermassive black hole. As in the previous rendering, the viewer can observe dense accumulations of material flowing in the direction of Sagittarius A *. These clusters are formed by the collision of the winds of massive stars near the hole. Along with observing their movement, viewers can observe how a relatively low-density gas falls in the direction of Sagittarius A *. In this new visualization, blue and cyan represent the x-rays of a hot gas with a temperature of tens of millions of degrees; red color indicates moderately dense areas of colder gas with temperatures of tens of thousands of degrees; yellow denotes the coldest gas with the highest density.

The x-ray cluster slowly moves when it is far from Sagittarius A *, and then picks up speed and envelops the viewer when it enters inside. Sometimes gas accumulations collide with gas emitted by other stars, which causes a flash of X-rays when the gas is heated, and then it cools quickly. Away from the viewer, the video also shows the collisions of fast stellar winds creating X-rays. It is believed that these collisions provide the main source of hot gas that Chandra sees.

When an explosion occurs in the vicinity of a black hole, the ejected gas collides with material leaking from massive stars, pushes it back and causes it to glow in X-rays. When the flash subsides, the wind returns to normal and the X-rays disappear.

The 360-degree video of the galactic center is ideal to watch with glasses of virtual reality. Videos can also be viewed on smartphones using the YouTube app. Moving the phone shows another part of the video, imitating the effect of wearing virtual reality glasses. Most browsers on your computer also allow you to watch 360-degree videos on YouTube. To look around, either click the mouse and move aside, or use the arrows in the corner.