Volcanic activity on Mars disappeared along with dinosaurs on Earth 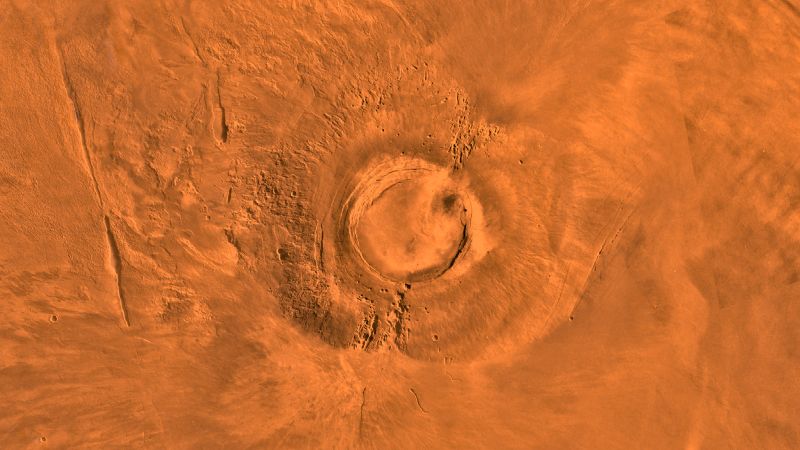 A new study conducted using the Mars Orbital Apparatus MRO (NASA) indicates that the Mons Arsia region contains one of the largest volcanoes on Mars. These volcanoes could produce huge currents of lava. This process, most likely, stopped only 50 million years ago. One of the craters from this volcano was photographed by Viking 1.

A new study conducted by NASA scientists shows that the giant Martian volcano Mons Arsia produced a new lava flow every 1-3 million years at the final stage of its activity. According to scientists, the last volcanic activity here stopped about 50 million years ago. This period coincided with the disappearance from the Earth of plants, dinosaurs, and many other animals.

Located south of the equator of Mars, Mons Arsia is the southernmost volcano of the famous volcanic trio of wide and large volcanoes, known collectively as Tharsis Montes.

The Mons Arsia volcano formed several billion years ago. The new volcanic activity, as scientists think, occurred in the caldera – a deepening in the shape of a bowl at the top of the volcano – where 29 volcanic craters were found. Until now, it has been difficult to make an accurate assessment of the volcanic activity of this region.

“We estimate that the final activity of the Mons Arsia volcano probably occurred about 150 million years ago, volcanic activity stopped with the disappearance of dinosaurs and other creatures on Earth,” said Jacob Richardson, a scientist at the Goddard Space Flight Center.