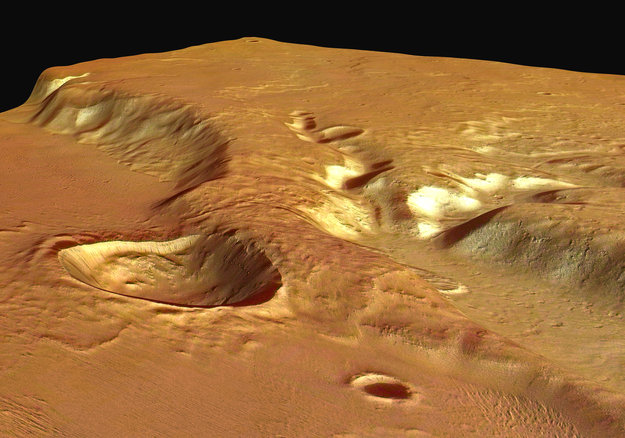 Today’s weather forecast on Mars speaks of a very hot season and a continuous fog of dust, which has been holding for quite a long period on the planet due to a dust storm. But several billion years ago, the weather was completely different.

According to a new study published May 22 in the scientific periodical Journal of Geophysical Research. In their study, scientists came to the conclusion that on ancient Mars, namely three billion years ago, the surface of the Red Planet may have been covered by one single ocean. This ocean was very shallow – only 20 centimeters in depth. And the phase of “Water Mars” was just a consequence of one natural phenomenon: it is an eruption of volcanoes.

This phase began approximately 3.5 billion years ago after the eruption of volcanoes and lasted for a maximum of 500 million years thereafter. According to scientists, eruptions of large volcanoes may have changed every aspect of the Martian geosphere.

“These eruptions have affected the atmospheric, superficial and internal evolution of Mars” – said planetologists from the Johns Hopkins University in Maryland.

To obtain evidence of the volcanic past of Mars, the scientists studied the features of a terrain landscape known as the Medusae Fossae Formation (MFF). Many hills and mezastructures are seen here.

“This is a major deposit, not only on a Martian scale, but also in terms of the solar system,” the study authors said.

This unusual region stretches along the equator of Mars and is strikingly different from neighboring regions. The rocks there are much milder than the usual Martian crust and strange destructive processes have been observed here. This allowed scientists to assume that volcanism on the ancient Red Planet had a place to be. And he, in turn, led to the water phase on Mars.