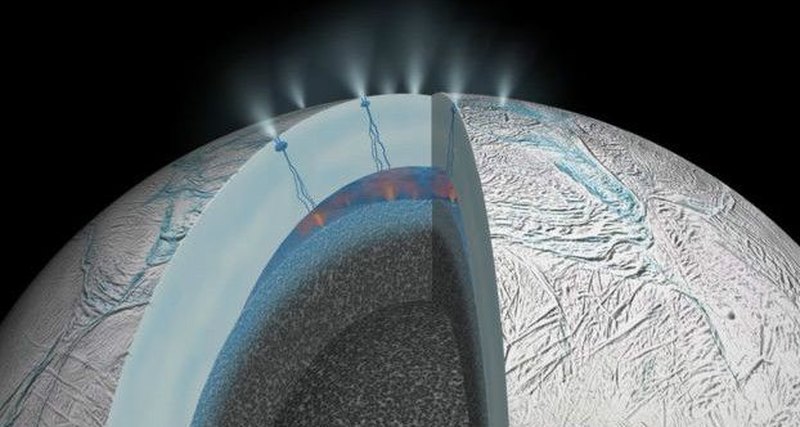 On the satellite of Saturn Enceladus, high geysers strike from under the ice: their trains rise high on the surface of Enceladus and are visible in Cassini’s photographs. Their liquid is an aqueous solution, so scientists assume that under the crust of ice, in the ocean there can be life – or at least precursors of biomolecules.

However, while the missions to Enceladus are not going to be sent, it is therefore possible to study its geysers only with the help of telescopes and models. And a suitable model was found very close to Earth: it was the sewage systems of space vehicles.

In 1984, during the flight of the Discovery shuttle around the fuel tank vent valve, a 60 cm icicle rose. Hence, with regulating water discharges into the cold airless space, the snaffles can grow to such a size, which means that the same icicles can be found on Enceladus.
Additional information on what can happen on the icy satellite of Saturn, provided an incident in 1996 with the Japanese space flyer unit, launched on the ground by the Endeavor shuttle. On the surface of the Space Flyer Unit were found ice cubes, and in them – trace amounts of phosphorus and sulfur, which could get there along with the emissions of the system for processing the human waste of the shuttle.

This is encouraging: it means that these elements can linger in the ice on the surface of Enceladus. Sulfur and phosphorus are part of the molecules of which all life on earth is composed; if they can be found in particles frozen after the water is released on the shuttle, it means that they can be found on Enceladus – if sulfur and phosphorus are there.