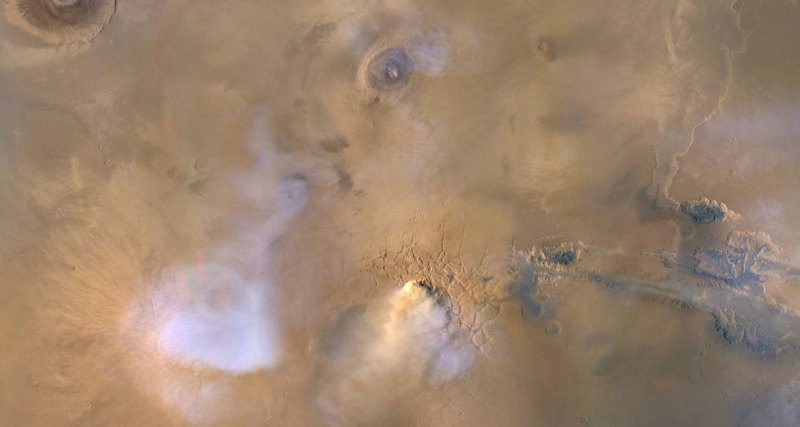 Water could leave the surface of the Red Planet as a result of a very interesting and unusual climatic phenomenon, which is observed today.

According to a new study, giant pillars of dust during storms on Mars can reach a height of 80 km and act as space elevators, throwing into space everything that is on the surface of the planet. This phenomenon may explain how exactly the water left the Red Planet in the distant past.

On Earth, a storm or storm, as a rule, is concentrated in one area, but on Mars, everything is a little different. About once every decade, a global storm envelops its entire surface, which lasts for several weeks. For example, such a storm was observed in 2018, when Mars became covered with a yellowish haze.

Two new research papers (one published here and one second here), authored by Nicholas Havens of Hampton University and the Institute of Space Sciences, deal with the strange meteorological phenomenon that occurs during these global Martian storms. We are talking about giant pillars of dust rising into the upper atmosphere, some of which reach a height of about 80 km. New articles allow us to understand the nature of these mysterious dust pillars, as well as suggest that they are guilty of the fact that water disappeared on Mars.

Havens and his colleagues studied a pair of dust pillars, one in 2007 and another in 2018, using data from NASA’s Martian orbiting satellite Mars Reconnaissance Orbiter (MRO). This device is equipped with a unique device – the Mars Climate Sounder thermal probe, which can “see” through thick layers of dust. Scientists also studied dust pillar images taken with another tool of this Red Planet satellite – Mars Color Imager (MARCI).

As the study showed, dust columns are much denser than ordinary dust clouds that are present in the atmosphere of Mars. In addition, they rise much higher than dust clouds. These giant columns can arise not only during a storm, but most of them are formed precisely during a global storm.

These dust pillars have a base with a diameter of up to 90 km, expanding upwards to 600 km, and scatter dust rising from the surface of the planet in an area with a diameter of more than 4000 km. In 2018, a global storm, during which such pillars formed, lasted almost four weeks.

Together with dust, moisture is also taken from the surface of the planet. Dust pillars, like a space elevator, lift it into those layers of the atmosphere where, under the influence of solar radiation, water molecules decay and are carried away into space. It is very likely that this is how Mars lost all its water.