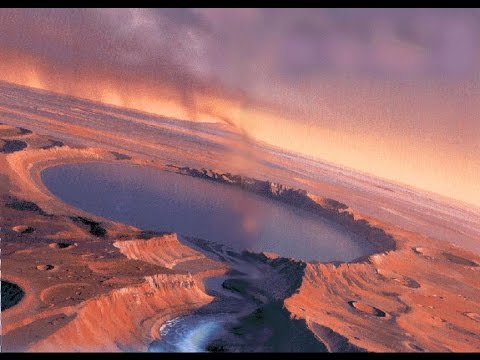 Mars stayed wet and had a huge lake the size of lake Ontario on a billion years longer than previously thought. To such conclusion scientists have come, having considered carefully the channel of the polar streams and pools of dried lakes.

The data obtained in the survey of the North polar regions of Mars, indicate that vast reserves of liquid water existed on the planet for a billion years longer than the so-called wet era of Mars — is well-documented geological period.

This, in turn, may amend our ideas about the evolution of climate on Mars, which could remain suitable for microbial life much longer.

“We found trench that carried water into the lake basin, — said Sharon Wilson, co-author of the work published in the journal of Geophysical Research: Planets of the Smithsonian institution. — Some pools lakes were filled and peraonality, indicating a significant amount of water in the landscapes of the time.

In their work, the scientists analyzed the topography in the so-called high mountainous region of Arabia Terra in the Northern polar latitudes of the planet, shot with two cameras on Board the spacecraft MRO. We also used images sent by an earlier NASA mission Mars Global Surveyor and the European Mars Express probe continues its work.

“One of the lakes in the area comparable in size to lake Tahoe, — said Wilson, referring to the largest lake between the States of Nevada and California, having a volume of 188 cubic kilometers. Is the Martian lake was filled with water, because of the valley from the southern edge, and flowed over the edge in the North, creating a stream of water in a very wide basin, which we called HART lake.

The chain of lakes and depressions that were part of the pool HART lake, stretches for 150 kilometres.