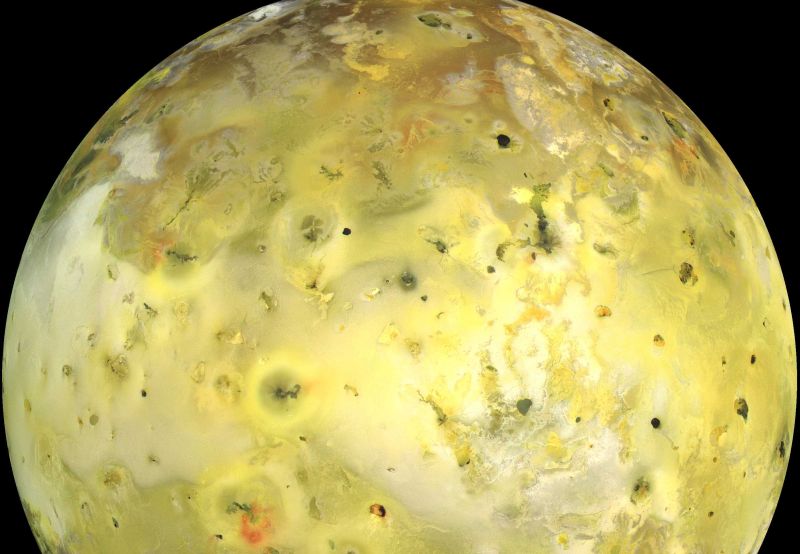 Approximately every six years, the orbits of Europe and Io line up so that for the viewer from Earth their trajectories cross each other, providing unique opportunities for observing these unusual and large satellites of Jupiter. Recall that the first of them is covered with a thick layer of ice, from under which the powerful geysers of the hidden ocean of liquid water continually break through; Io is also known as the most volcanically active body of the solar system. Tectonics of plates, as on Earth, are not here, however powerful tidal forces acting on the satellite in the gravitational field of Jupiter cause it to erupt almost constantly.

This “construction of the orbits” of Io and Europe took place in March 2015, when Katherine de Kleer and her colleagues used the telescopes of the LBTO observatory to consider Pater Loki, Io’s largest volcanic hollow. The size of this region reaches 250 km, it actively radiates, on the thermal maps of the satellite, a bright spot: on Pater Loki, 10-20% of its heat loss occurs. Every 400-600 days the hollow becomes brighter, then dimmer.

It is believed that this is due to the cooling of lava on the surface of the lake. Having hardened and compacted, at some point it leaves in layers to depth, again opening layers of hot liquid lava and responding to surrounding areas with waves moving at a speed of 1-2 km / h. Another hypothesis of the fluctuations in the brightness of Patera Loki and the waves on it indicates that in the lake eruptions hidden beneath the surface can still continue.

Katerina de Clears and her co-authors for the first time considered this process in detail and even managed to draw up a temperature map of the surface of the lava lake with a resolution ten times greater than was available so far. This map showed that, from the relatively cold center of Patera Loki, at that moment, two waves simultaneously appeared at different times: one in the clockwise direction, the other against. This is reported by scientists in an article published by the journal Nature.

The first wave appeared in the northwest of Patera Loki and moved to the southeast. A little later, in the eastern part, a second wave formed, heading west. A complete “bypass” of the lava lake along the perimeter occupies these waves from 180 to 230 days. All this, apparently, indicates the heterogeneity of the composition and properties in different parts of the lava lake. However, in what exactly the reason of this unusual phenomenon, to find out while it was not possible. It may be necessary to wait for a new intersection of Io with Europe – in 2021.