Titan, the already pretty weird moon of Saturn, just got a little bit weirder. Astronomers have detected cyclopropenylidene (C3H2) in its atmosphere – an extremely rare carbon-based molecule that’s so reactive, it can only exist on Earth in laboratory conditions.

In fact, it’s so rare that it has never before been detected in an atmosphere, in the Solar System or elsewhere. The only other place it can remain stable is the cold void of interstellar space. But it may be a building block for more complex organic molecules that could one day lead to life.

“We think of Titan as a real-life laboratory where we can see similar chemistry to that of ancient Earth when life was taking hold here,” said astrobiologist Melissa Trainer of NASA’s Goddard Space Flight Center, one of the chief scientists set to investigate the moon in the upcoming Dragonfly mission launching in 2027. 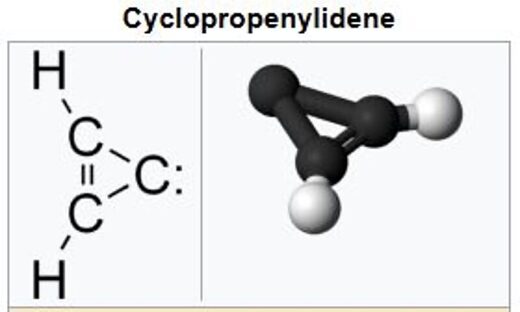 © Wikipedia
Cyclopropenylidene or c-C3H2, is an aromatic molecule belonging to a highly reactive class of organic molecules known as carbenes.

“We’ll be looking for bigger molecules than C3H2, but we need to know what’s happening in the atmosphere to understand the chemical reactions that lead complex organic molecules to form and rain down to the surface.”

Cyclopropenylidene – which even NASA researchers describe as a “very weird little molecule” – doesn’t tend to last long in atmospheric conditions, because it reacts very quickly and easily with other molecules, forming other compounds.

Once it does so, it’s no longer cyclopropenylidene. In interstellar space, any gas or dust is usually very cold, and very diffuse, which means compounds aren’t interacting much, and cyclopropenylidene can hang around.

Titan is very different from interstellar space. It’s sort of soggy, with hydrocarbon lakes, hydrocarbon clouds, and a predominantly nitrogen atmosphere, with a bit of methane. The atmosphere is four times thicker than Earth’s atmosphere (which is also dominated by nitrogen). Under the surface, scientists think there’s a huge ocean of salt water.

It was in the tenuous upper atmosphere, high above the surface, where they detected an unknown chemical signature. By comparing it to a database of chemical profiles, the team identified the molecule as cyclopropenylidene. It’s likely that the thinness of the atmosphere at that altitude contributes to the molecule’s survival, but why it appears on Titan and no other world is a mystery. 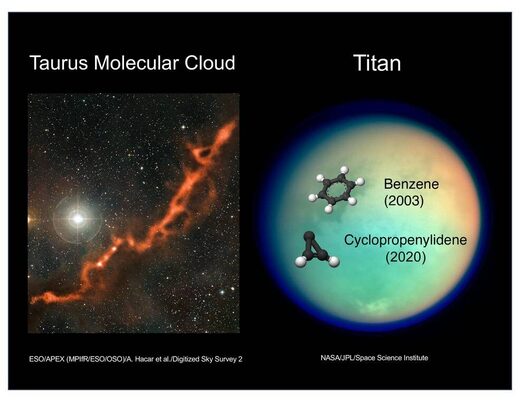 Until now, cyclopropenylidene has been detected only in molecular clouds of gas and dust, such as the Taurus Molecular Cloud, which is a stellar nursery in the constellation Taurus more than 400 light years away. Recently, NASA Goddard scientist Conor Nixon, along with his team, found this unique molecule in Titan’s atmosphere; the first time it has been detected outside of a molecular cloud.

“When I realised I was looking at cyclopropenylidene, my first thought was, ‘Well, this is really unexpected,'” Nixon said. “Titan is unique in our Solar System. It has proved to be a treasure trove of new molecules.”

Cyclopropenylidene is of particular interest because it’s what is known as a ring molecule; its three carbon atoms are linked together in a ring (well, a triangle, but the principle is the same). Although cyclopropenylidene itself is not known to play a biological role, the nucleobases of DNA and RNA are based on such molecular rings.

“The cyclic nature of them opens up this extra branch of chemistry that allows you to build these biologically important molecules,” said astrobiologist Alexander Thelen of NASA’s Goddard Space Flight Centre.

Previously, benzene (C6H6) was thought to be the smallest hydrocarbon ring molecule found in any atmosphere (including Titan’s). Cyclopropenylidene has it beat.

Titan is already a hive of organic chemical activity. The nitrogen and methane break up in the sunlight, triggering a cascade of chemical reactions. Whether those reactions could result in life is a question scientists are dying to answer.

“We’re trying to figure out if Titan is habitable,” said geologist Rosaly Lopes of NASA’s Jet Propulsion Laboratory. “So we want to know what compounds from the atmosphere get to the surface, and then, whether that material can get through the ice crust to the ocean below, because we think the ocean is where the habitable conditions are.”

Working out which compounds are present in the atmosphere is a very important step in that research process. Cyclopropenylidene may be small, and strange, but this extremely rare molecule could be a key piece of the Titan chemistry puzzle. Now we just have to figure out how it fits in.

The research has been published in The Astronomical Journal.