What happened to Lovejoy’s comet? 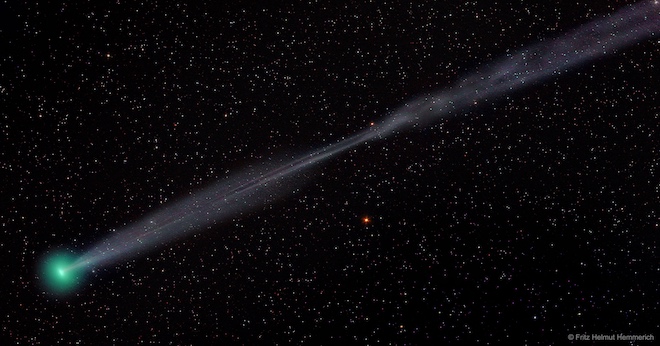 At the beginning of the month, a photograph of comrade Lovejoy was taken. After its processing, it became clear that the comet suddenly had a long and complexly arranged ion tail. It is noteworthy here that the complex effect of the action of the solar wind and magnetic field has turned the middle of the ionic tail of the comet into a “needle eye”.

Comet C / 2017 E4 Lovejoy was discovered only last month known in the field of comet research by scientist Terry Lovejoy. At the beginning of April, the celestial body reached a visual value of 7, which gave a good opportunity to observe it with binoculars and cameras with a long exposure.

This snapshot is even more remarkable in that two days ago the nucleus of a comet broke up and began to fade as the body approached the Sun as close as possible.