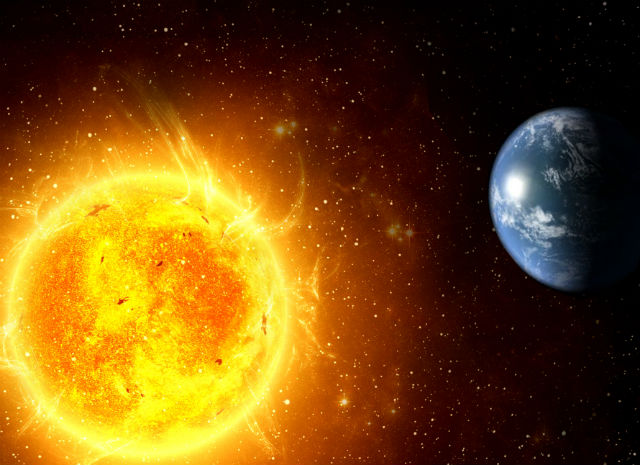 For example, in 2011, spots on the Sun was only 2 days. The decrease in the number of sunspots and flares is a clear sign of the approaching of the Sun to the minimum of the 24th cycle of solar activity.

What is the influence of variations in solar activity (minimum expected in 2019-2020y) for terrestrial and cosmic processes ?

1. THE BRIGHTNESS OF THE SUN.

Change the brightness of the Sun from minimum to maximum is about 0.1 %.

The luminosity in the ultraviolet spectrum at wavelengths of 200-300 nm changes by approximately 1.5 % from minimum to maximum.

4. WARMING OF THE STRATOSPHERE

The greater quantity of ozone, the stratosphere becomes warmer and Vice versa.

Temperature changes in the stratosphere leads to a shift of the tropospheric and stratospheric atmospheric currents towards the poles of the Earth.

These processes probably weaken the Western transfer system “ocean – land” in the troposphere, which can cause colder winters in Europe (see the Maunder Minimum of 17-18 century).

During the maximum increase is observed in the solar wind (stream of particles from the Sun, mostly protons) and their density.

Colliding at high speed with the Earth’s magnetic field it causes an intense Aurora.

At the time of low frequency and intensity of auroras is reduced as a result of the weakening of the intensity of the solar wind.

Amplification of the solar wind leads to a weakening of the influence of cosmic rays on the planet at maximum and to strengthen it during a minimum.

In turn, increased cosmic radiation during a minimum increases the distance at which it can permeate, for example, it is known that during solar minimum, increasing the radiation dose civil aircraft.

It is assumed that cosmic radiation affects the amount of aerosols in the atmosphere, which play the role of condensation nuclei in the formation of clouds. The overall impact on the level of the Earth’s albedo is about 1.5-2 %.

During the low radiation level in the upper atmosphere increases, while the maximum decreases.

The more active the Sun, the greater the radius of the heliosphere (region of space near the sun where the solar wind plasma is moving relative to the Sun at supersonic speed.)